At a gala event following the 10th Women in Law Enforcement Congress, Inspector Wendy Willson, Manager of the NSPCA’s Special Investigations Unit, was awarded the Medal of Heroism. The ceremony was held at the Indaba Hotel on 24 May 2017. 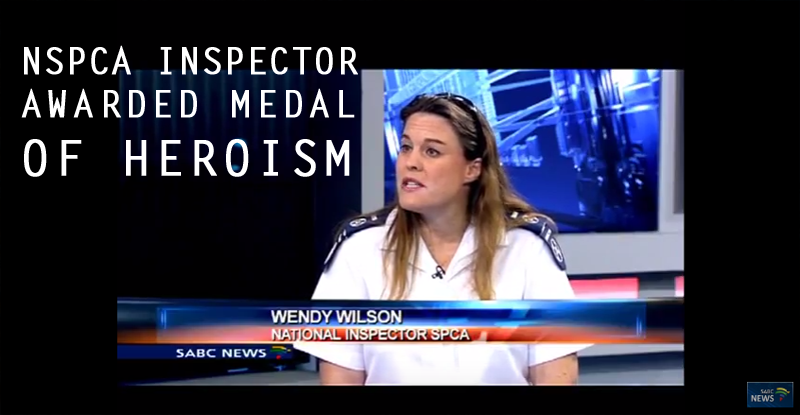 Wendy Willson has been working for the NSPCA for the past 7 years and is a dedicated Inspector who always goes the extra mile for animals.

“I am honoured to have been the recipient of this award, which I accept on behalf of the many animal victims of abuse.” said Inspector Wendy Willson.

This is the third year in a row that an NSPCA representative has received an award at this annual ceremony in recognition for commitment to law enforcement.

The NSPCA and colleagues from SPCAs throughout South Africa extend congratulations to Inspector Willson. This recognition from Women in Law Enforcement is a worthy recognition.

Mrs Wilson has appeared on many television and radio interviews during her career, below is one of the interviews she had regarding the outcome of Dog Fighting when it finally became illegal in South Africa.

Published on Nov 20, 2013 : Dog fighting has been making headlines recently. On Monday thirteen men arrested in connection with a dog fighting syndicate were granted bail by the Tsakane Magistrate's Court. A condition of bail was that all their domestic animals be handed over to a local SPCA by tomorrow. This follows after police arrested 18 people while a violent dog fight was in progress last month. At least 14 dogs were rescued, but some had to be put down due to the severity of their injuries. The pictures are simply to graphic to put on air, so we have pasted them on our twitter page @SABCNewsroom. And we still would like to warn sensitive viewers that some of the images you are about to see on air are disturbing.
In studio with us today is the NSPCA's National Inspector Wendy Willson

CAT GROOMING: WHEN AND HOW TO CUT YOUR CAT’S NAILS
Grooming your cat's nails is always easier said than done, but we believe these handy tips will help

Avian Pox and the risks it exposes to our wild and domestic birds
Cape Town 16.01.2019:  There have been reports of wild birds (pigeons and doves) being brought into

Animals from the ‘worst zoo’ to be relocated to FOUR PAWS sanctuaries
16.11.2018, Cape Town – Preparations to transfer recently rescued Albanian animals, which were kept