We celebrate Father's Day by showcasing the best animal dads alive.  A day that is generally annually honoring committed human dads. Here National Geographic shared with us commitment from the dads in the animal kingdom. 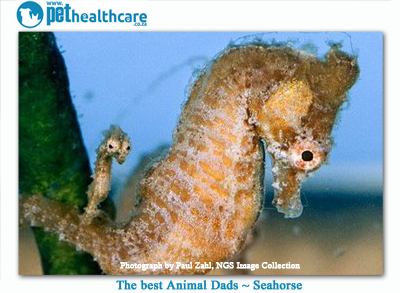 The seahorse fathers (above, a newborn hitches a ride on dad's tail) might just blow these proud papas out of the water.

Seahorses are a type of fish in which the males actually get "pregnant." The female seahorse deposits her eggs in the male's specialized pouch, and the male carries up to 2,000 babies during its 10- to 25-day pregnancy.

"They're fascinatingmales have more or less become females, [almost] transgendered," said Mark Pagel, an evolutionary biologist at the University of Reading in the U.K. "They're devoted fathers."

In general throughout the animal kingdom, males leave parenting to the females, because males have more chances to reproduce and so can create many more offspring, Pagel said.

Pagel calls this a "cruel bind [that] often favors men"--as soon as the female gets pregnant, the male just runs off.

U.S. comedian Chris Rock has said that "a man is only as faithful as his options," he noted, and "that's exactly what happens with animals." 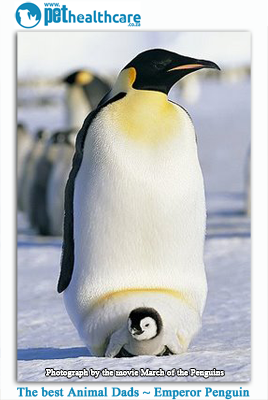 Made famous by the movie March of the Penguins, emperor penguin fathers endure below-freezing temperatures and forgo food to incubate their eggs.

After the female lays a single egg, her mate rests it on his feet and covers it with a flap of skin (above, a penguin protects its chick using the same skin flap).

"You could think of that pouch as almost a male womb, except they're birds," the University of Reading's Pagel said. "They're very much like seahorses in that respect: [They've] taken over a role rightly or wrongly we traditionally associate with females."

For four months the males huddle together, not moving much, while the females fill up on seafood in the ocean. The females eventually return to help feed the newly hatched chicks.

Both Pagel and Forbes say that animal parents give us insight into how human families work. "We can see ourselves in other animals," Pagel said. 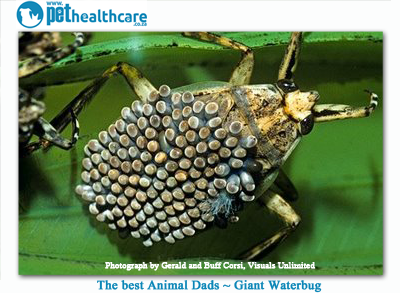 Talk about back-breaking work—the male giant water bug (pictured above in California) literally totes around his brood of about 150 eggs until they hatch.

After a courtship of sparring and grasping, these ferocious insects mate, and the females cement their fertilized eggs to the males' backs with a natural glue.

Over the next three weeks, the male becomes a "very effective dad," said Scott Forbes, a University of Winnipeg biologist and author of A Natural History of Families. The daddy water bug fiercely protects his eggs and periodically exposes them to air to prevent them from growing mold.  —Photograph by Gerald and Buff Corsi, Visuals Unlimited 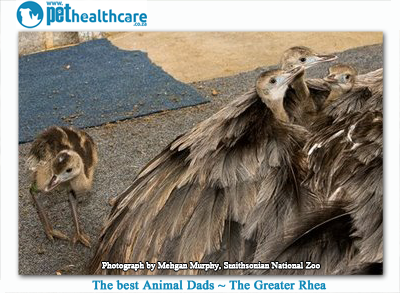 For most birds, females are stuck with child care, but not so for the South America's greater rhea (above, chicks nestle into their dad's back feathers at Washington D.C.'s National Zoo).

Females mate with several males during the breeding season, and several birds will lay their eggs in a nest created by a male. The male then incubates up to 50 eggs for six weeks and cares for the newly hatched young. The dads aggressively guard the babies, charging at any animal—even a female rhea—that approaches.

The male rhea at the National Zoo, a second-time father, keeps his chicks from meandering too far away with a rapid clacking of his bill, according to zoo officials.

Because the females put such a "heavy investment"—energy and resources—into producing large eggs, it makes sense for males to pick up the responsibility of caring for the offspring, Forbes said.  —Photograph by Mehgan Murphy, Smithsonian National Zoo 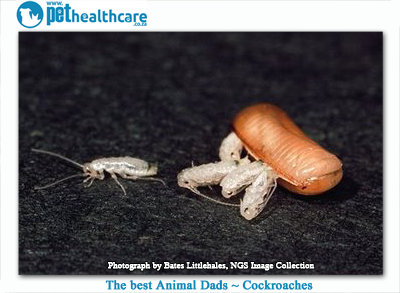 Cockroaches may get a lot of bad press, but you can't call them deadbeat dads.

In species that feed on wood, the parents use the material to build nests and find food for their larvae. Such parental care is "pretty unusual" in insects, Forbes said.

Cockroach fathers will even eat bird droppings to obtain nitrogen, a necessary part of their diet, and carry it back to their young (above, German cockroach babies emerge from an egg). 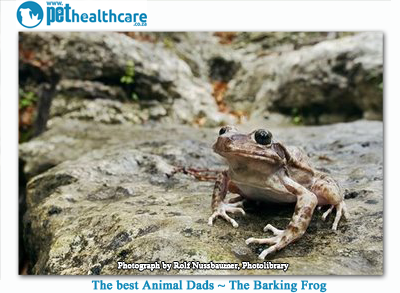 The barking frog named for its throaty, dog-like call guards his brood after the female lays her eggs under rocks or logs in the U.S. Southwest.

The frog hangs out by the eggs for several weeks, wetting the eggs with his urine if they dry out.

In other frog species, males carry their larvae wrapped around their legs or swallow their newly hatched tadpoles to shelter them in special mouth sacs, Forbes added, giving the offspring a safe haven in which to develop.  —Photograph by Rolf Nussbaumer, Photolibrary 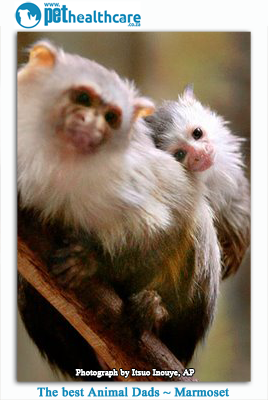 Male marmosets in South America not only carry, feed, and groom their twin babies (pictured, a baby black-tailed marmoset with its mother in a Tokyo zoo), they may even act as "midwives" during birth, grooming and licking the newborns.

Marmoset dads may be so involved because of the high cost of birth for the mother, whose unborn babies eventually make up 25 percent of her body weight—equal to a 120-pound (55-kilogram) woman giving birth to a 30-pound (14-kilogram) infant.

Though nature's default is female-only care, animal fathers such as marmosets will often pitch in when "kids are expensive," for instance, when raising offspring requires two full-time parents that are mated for life, the University of Winnipeg's Forbes said.   —Photograph by Itsuo Inouye, AP

Video: Man Rescues Baby Coyote
Watching this man rescue a wild animal is the cutest thing ever, but hearing him talk to the little