Problems around the ownership of pets are common amongst owners of sectional title properties, but while laws may be imposed by the trustees of the homeowners’ associations, the requirement for a reasonable approach is entrenched in the very laws which govern how a sectional title scheme should be managed. 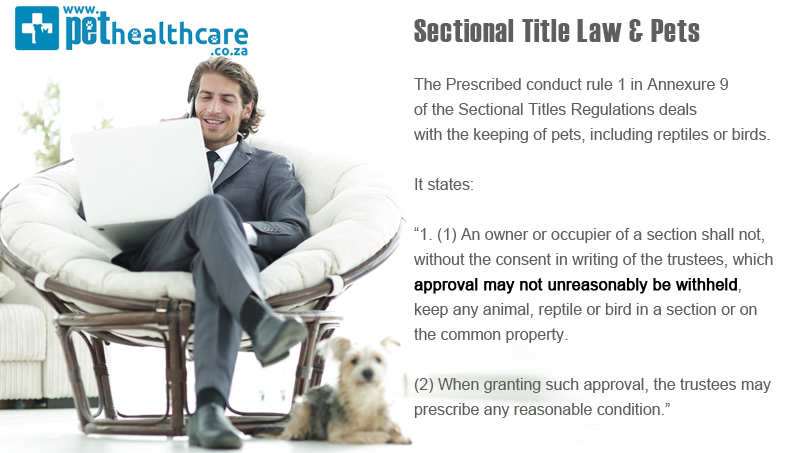 When can the trustees legally withdraw consent of pet ownership?

Where the trustees have reasonably, after following due process and considering all relevant factors, withdrawn their consent to keep a pet, the owner concerned is then not entitled to continue keeping that pet in the scheme.

This is according to the Prescribed conduct rule 1 in Annexure 9 of the Sectional Titles Regulations which deals with the keeping of pets, including reptiles or birds.

It states:
“1. (1) An owner or occupier of a section shall not, without the consent in writing of the trustees, which approval may not unreasonably be withheld, keep any animal, reptile or bird in a section or on the common property.

(2) When granting such approval, the trustees may prescribe any reasonable condition.”

What is the reason for this regulation?

This means that both parties need to consider each other’s needs.

What are the key inquiry sections for granting or refusing consent to pet ownership?

When can a pet owner take the matter to court?

The trustees must furthermore, base their decision on the facts and circumstances of the particular case. The decision to either grant or refuse consent should be recorded in the minutes of the trustee’s meeting, giving reasons that illustrate they have applied their minds to the particular set of facts.

Is there an example of a successful court case in favour of the pet owner?

An example of a court case which arose from a dispute regarding permission to keep a pet in a sectional title development was Body Corporate of The Laguna Ridge Scheme No 152/1987 v Dorse 1999 (2) SA 512 (D), in which it was held that the trustees are obliged to individually consider each request for permission to keep a pet, and to base their decision on the facts and circumstances of each particular case.

A further extract from this case pointed out that trustees are not entitled to refuse an application on the basis that they are afraid of creating a precedent. The trustees were, in this case, found to have been grossly unreasonable and have failed to apply their minds when they refused the Applicant permission to keep a small dog. 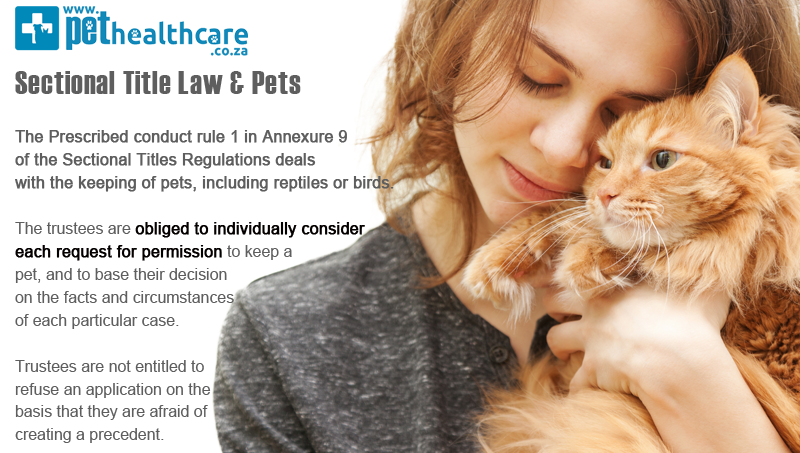 What are the reasonable conditions that trustees look for in granting or withholding permission?

The question of the reasonableness of the actions of the trustees, in granting or withholding permission and setting conditions, will turn on

Can the bond between animal and human be a determining factor to keep a pet?

It is unlikely that any action by the trustees to remove a ‘companion animal’ or ‘service animal’, such as a guide dog owned by a blind or partially sighted owner, would be held to be reasonable in the absence of a clear nuisance caused by the animal. The fact that a person sometimes forms an extremely strong emotional tie with their pet could also be an important consideration when the trustees decide whether or not to grant permission.

When are trustees able to withhold permission to keep a pet?

The trustees are not, however, powerless in situations where the conditions of permission to keep a pet are not being met. The trustees can withdraw permission if it is reasonable to do so. Examples include if the pet is causing a nuisance to other owners or occupiers (e.g. barking persistently), or the pet is considered dangerous to other owners or occupiers.

Are the trustees allowed to forcibly remove an animal from a pet owner?

Where the trustees have reasonably, after following due process, withdrawn their consent to keep a pet, the owner concerned is then not entitled to continue keeping that pet in the scheme. However, the enforcement of this could be tricky for the trustees. The body corporate is not entitled to forcibly remove a pet from an owner’s possession. This can only be achieved by a court order, if – for example – there are too many dogs being kept in an inadequate space, the trustees can get the assistance from the local SPCA who can be contacted to come to the scheme to do an inspection in loco. If it is justified, they will implement the necessary legal steps to have the dogs removed.

What are the benefits for pet owners who abide by the law?

Careful consideration and the application of the principles as set out in the rules of the scheme and the above-mentioned regulations will lead not only to peaceful co-existence, but also healthy growth in property values for the developments implementing such approach. A harmonious board of trustees results in a happy community, which in turn will ensure a good name for any development.

This article is a general information sheet and should not be used or relied on as legal or other professional advice. No liability can be accepted for any errors or omissions nor for any loss or damage arising from reliance upon any information herein. Always contact your legal adviser for specific and detailed advice. Errors and omissions excepted (E&OE)

Willie Richards 500km Plus Adventure for Fallen Angels
Willie Richards is at it again! He is on a mission to create awareness for the animals and the envir

THE GOOD, THE BAD AND THE UGLY LISTS FOR VOLUNTEERING PLACES IN AFRICA
THE UPDATED LIST (as of 06/04/2019) OF GOOD PLACES THAT WE RECOMMEND SO FAR TO POTENTIAL VOLUNTEERS

10 Tips for Hiking with Dogs
It is always a pleasure to be able to take your dog for a long walk in the mountains, free from all