The National Council of SPCAs is delighted to report a positive, uplifting and heart-warming outcome relating to donkeys rescued from the horrific trade in their skins. 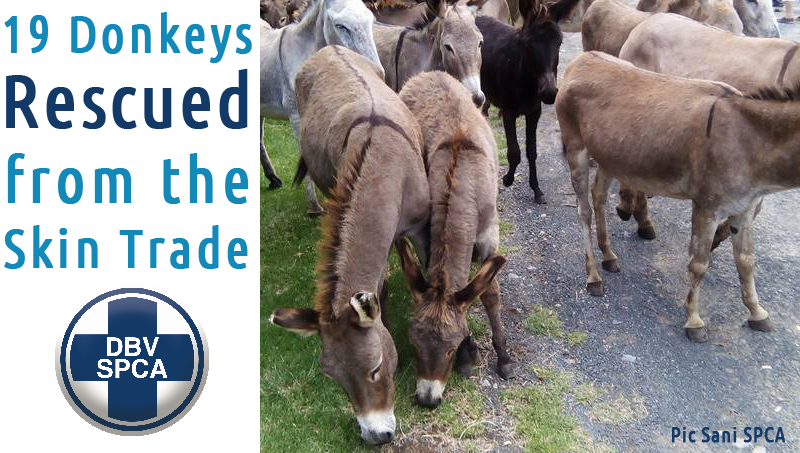 We report that 5 donkeys have arrived at a beautiful property in Bethlehem in the Free State where they will live out the rest of their lives. The donkeys were adopted according to the standard procedure which involves a formal application to adopt an animal and giving an undertaking of being able to afford private veterinary fees and committing to looking after the animal for the rest of its natural life.

A further 14 donkeys will travel shortly to a new home. Their adoptions have been approved as all the required administration and procedures have been undertaken.

First Stop for the Donkeys

These donkeys were rescued in the Sani area in early 2017. They were initially cared for at the Sani SPCA but since their operation is not far from the Lesotho border post, it was feared that the donkeys might be stolen. Their welfare and safety were top priorities so a decision was taken to move the donkeys to other SPCAs.

The journey to their temporary homes started early on the morning of 24 February 2017 when they were safely loaded into trucks and their journey to the Benoni SPCA and the Kloof and Highway SPCA began. No issues were encountered. Several stops were made en route to Johannesburg to provide water and facilitate checks by our Inspectors and veterinarian.

The end of the story is a very uplifting one not only for the donkeys but in terms of satisfaction for all the dedicated staff involved who worked tirelessly to ensure their safety and to secure their future.

Criminal Charges have been laid

The “donkey skin trade” continues, as do our efforts to monitor situations, respond to information received and to take whatever steps may be appropriate when necessary. Criminal charges have been laid in several instances, cases have come before the Courts and convictions obtained.

The NSPCA Needs Your Support

The National Council of SPCAs commits to combatting the scourge of the donkey skin trade tirelessly and steadfastly. All support is appreciated.

Information may be submitted to farm@nspca.co.za or to our Farm Animal Protection Unit on 011-907-3590. Informants are assured that they may remain anonymous.

Hidden Household Hazards for Pets
Our homes may feel safe and cosy, but they’re often filled with potential health hazards. Each year

5 Reasons why children must have pets
Having pets can teach your child many important life lessons. In today’s busy lives, many parents se

CAT GROOMING: WHEN AND HOW TO CUT YOUR CAT’S NAILS
Grooming your cat's nails is always easier said than done, but we believe these handy tips will help