How is this for a shocker! We had to arrest two of our own who have fallen into the trap of greed and easy money.  Plus these are the very people who we have entrusted into this role of looking after our wildlife.  We trust that they will be exposed and will never find a job in the industry again. 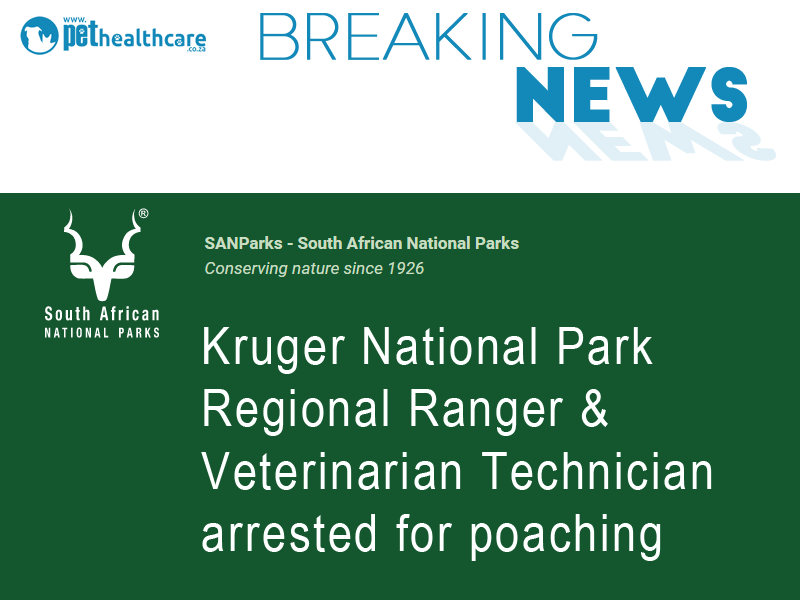 SANParks Rangers were on their normal daily patrol when they heard three gunshots in their area and rushed into the direction of the shots to investigate.  As they approached the scene they saw two men, one in green Ranger uniform and the other one in khaki clothes running towards the direction of a bakkie which was parked nearby.  The Rangers called for assistance as they were chasing the said bakkie which was ultimately blocked at some point by another group of Rangers who were also rushing to the area to assist in the chase.  The two suspects were arrested, a fresh white rhino carcass, two horns, a riffle and other poaching equipment were recovered.

The Chief Executive Officer of South African National Parks Mr Fundisile Mketeni who has in the past dedicated his time to visit all Ranger posts in the Park to address Ranger issues is currently in the Park. He reacted to the news of this arrest by saying, “It is indeed sad and horrible to hear of one of our own has been arrested for rhino poaching related activities.  These are the men that are tasked with leading the anti-poaching operations in the park.  We however applaud our Field Rangers who effected the arrest as difficult as it was for them to arrest their superior. This is evidence of the commitment of our employees to the fight against poaching where "no favour nor fear" is their guiding principle in the war against this scourge. We are confident that with this calibre of men and women in our parks, we will win this fight.

The two arrested suspects can’t be named as they still have to appear in court. "

Video Shelter pets via a Pet Shop
There are thousands of animal shelters in around the world. And most of them are overcrowded. Yet, p

Warrior dog buried alive finds her happy ending
26 January 2016:  On the 20th of October 2011 the dog named Warrior (renamed Lilly) was pulled from

Cats that make hacking, retching, gagging and coughing noises
Should you be worried if your cat is making hacking gagging retching or coughing noises, but not bri