Stray dog who raced 430 miles to a better home: Arthur latched on to an extreme sports team during Amazon race - and what happened next will melt the hardest heart

By Wills Robinson for MailOnline

Exhausted, covered in mud and desperately hungry, a team of Swedish athletes sat down for a meal as they prepared to take on a dangerous 20-mile trek through the Ecuadorian rainforest.

As they opened their canned meat, a tired Mikael Lindnord noticed a scruffy, miserable stray dog staring at him out of the corner of his eye.

Feeling sorry for him, he fed the dog a meatball and thought nothing of it, but as the team stood up to continue their race the animal started to follow them - and he didn't stop.

As the group of four navigated the final two stages of the 430-mile Adventure Racing World Championship, the dog befriended them and was eventually given the name Arthur.

Every grueling task the team face, Arthur would do the same. He swam alongside them while they kayaked down rivers, dragged himself up hills during hikes and pulled through knee-deep mud during treks.

Even when the team tried to get rid of their new member out of concerns for his safety - he refused to leave. 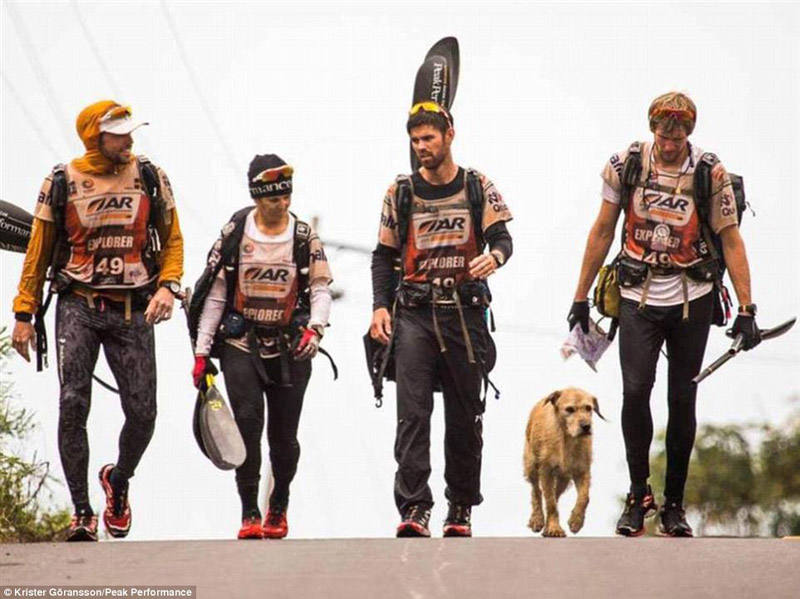 The fifth member: Team Peak Performance walk with stray dog Arthur during a stage of the 430-mile Adventure Racing World Championship. He followed the group of four during the grueling race 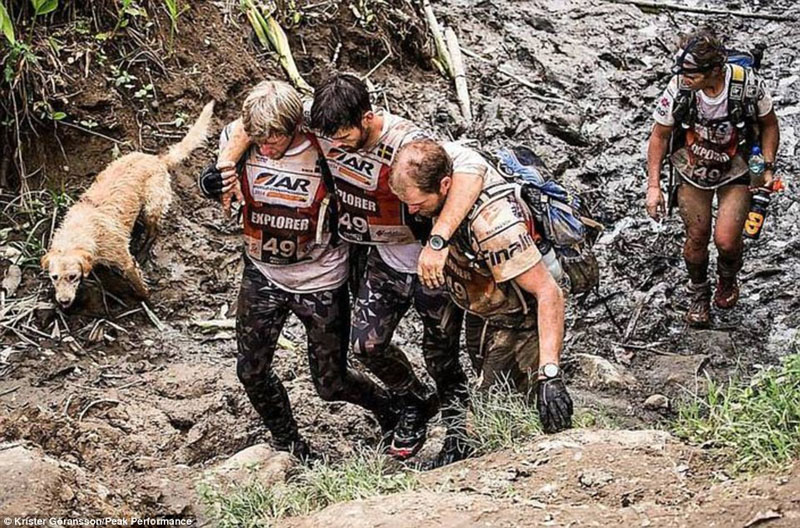 All terrains: Despite numerous attempts by the team to get rid of the dog, primarily for his own safety, he refused to go. It meant when he got stuck in the knee-deep mud they helped get him out and when he was exhausted, they stopped to take a break 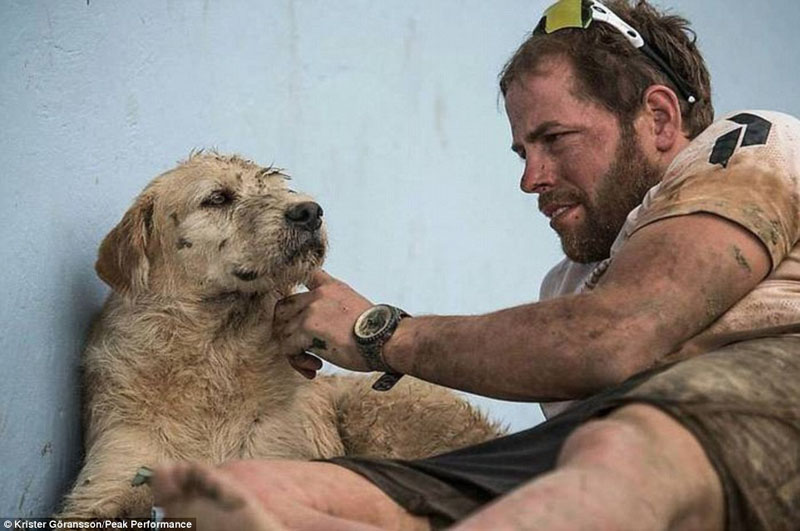 Encounter: Mikael Lindnord first noticed the scruffy dog when he was sitting down to eat canned meatballs. He fed Arthur one thinking nothing on it, but ended up creating a bond with the dog

This meant when he was tired they stopped for a break and when he got stuck in the mud they pulled him out.

After six days the team finished the race, and the dog had suffered. They therefore decided to take him to a vet while still in South America to have him checked out.

During that time Lindord thought to himself that after their experience, they could not leave Arthur, so he decided to adopt him and take him back to Sweden. He applied to the Jordbruksverket (the Swedish Board of Agriculture) and was made to wait to see if his application was successful.

After a tense few days, the team arrived at the airport with Arthur and boarded the plane with him back home.

Adventure Racing is a form of extreme sport that combines continuous hiking, trekking, mountain biking and kayaking over a successive number of days.

The world championships held in Ecuador covered three diverse geographical regions - the Andes, the Pacific and the Amazon rainforest.

Lindord told Swedish news site Aftonbladet: 'I had just opened a food pack when I saw a scruffy miserable dog in the corner of my eye.' 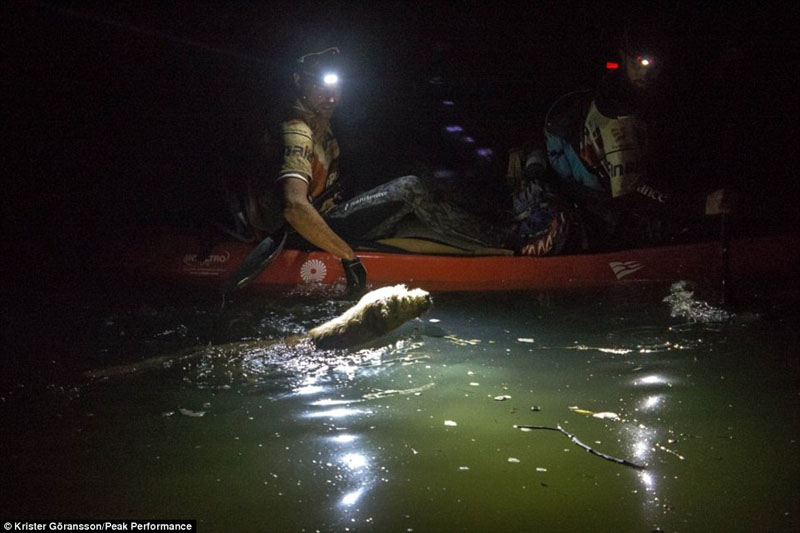 Determined: Before one of the segments of the race - a 36 mile kayak around the coast - organizers warned the team that taking Arthur along posed a risk to his and their safety. But Arthur swam alongside the boat and ended up being pulled in by Lindord 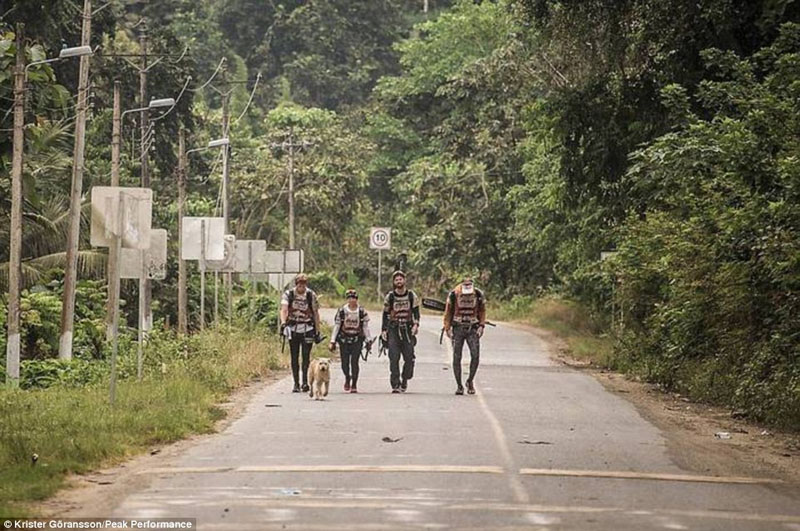 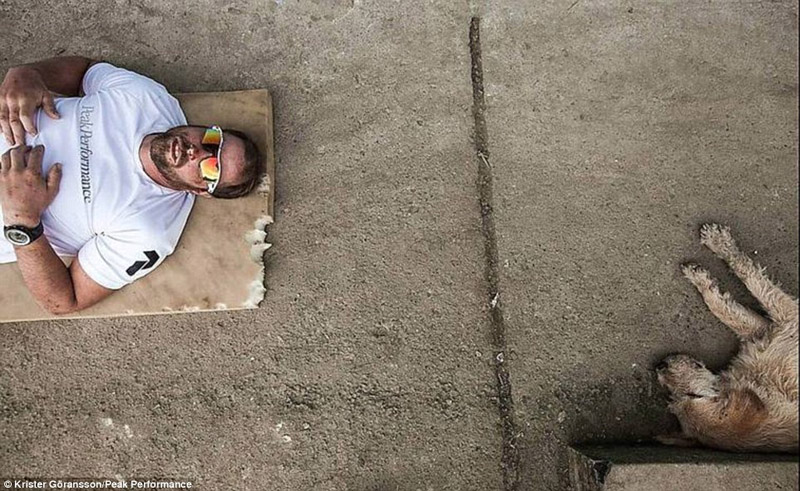 Resting: When the team slept Arthur would also curl up and take a nap alongside them

'I thought he was hungry and gave him a meatball. Then I thought no more of it.

He added: 'At one stage we had to take a break and the dog was totally wrecked. We opened two cans of food and let him eat, because he could find no food at all in the jungle.'

Before one of the segments of the race - a 36 mile kayak around the coast - organizers warned the team that taking Arthur along posed a risk to his and their safety.

They tried to set off without him, but as they left he jumped into the water beside them and started desperately paddling. Lindord, heartbroken by the site of Arthur struggling in the water, picked him up, put him in the kayak and let him stay for the rest of the journey.

The gesture prompted a standing ovation and cheers from spectators watching from the banks.

The ordeal to get him back to Sweden was documented on the team's Facebook page. In one post Lindord wrote: 'I almost cried in front of the computer, when receiving the decision from Jordbruksverket (Board of Agriculture) in Sweden!'

'The team is overwhelmed and happy knowing that Jordbruksverket has approved Mikaels application to bring Arthur to Sweden. A big important piece in the work to get Arhur on the plane, is done. So far so good. But, There are still one paper to go. The team are now working hard for the very last piece in this puzzel.'

Lindord ended by saying: 'I came to Ecuador to win the World Championship. Instead, I got a new friend.' 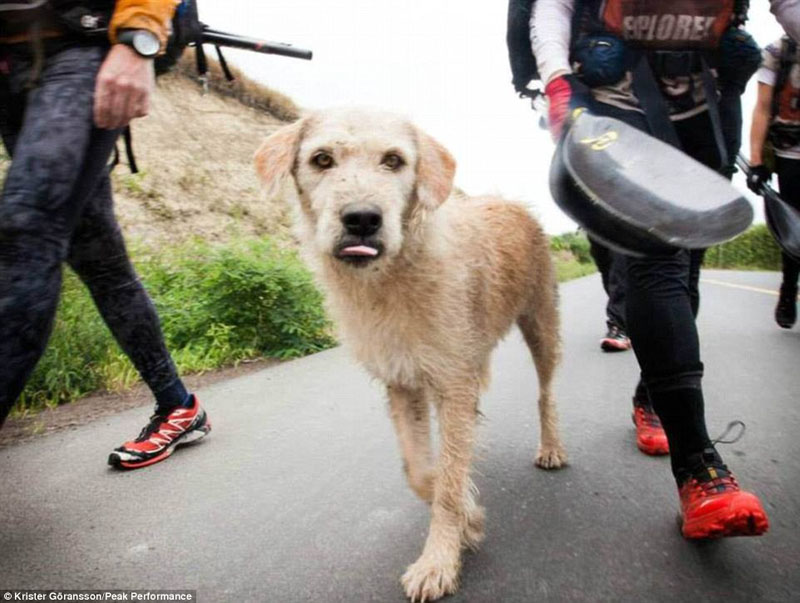 Support: At one point the dog was not able to find any food in the jungle, so the team stopped and gave him some of their canned food 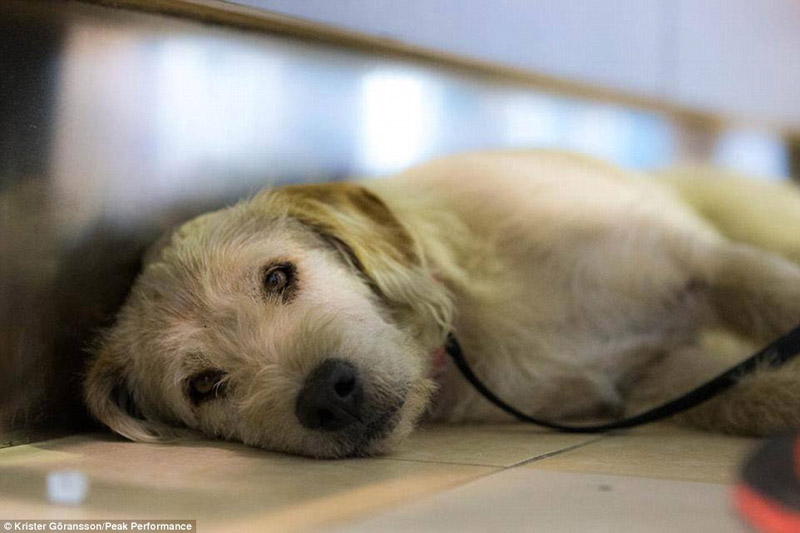 Challenge: As the team neared the finished the tasks began to take their toll on Arthur and he ended up with some injuries 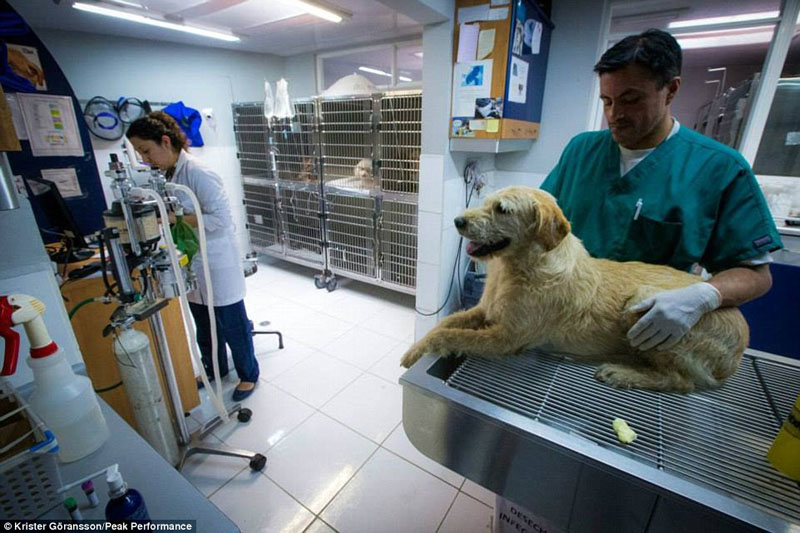 Health checks: When the team finished the race, they took Arthur to Ecuador to see a vet in order to prepare him for the trip back to Sweden 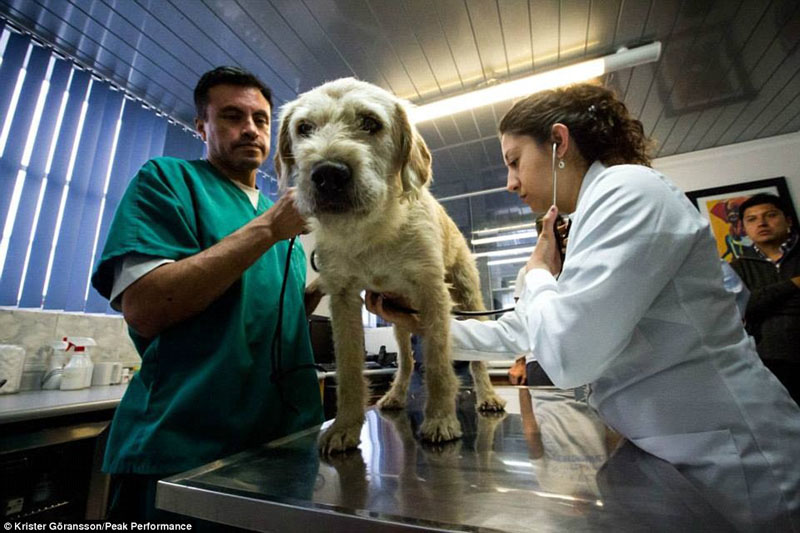 Donations: Team Peak Performance set up a PayPal account while they were still in South America to garner funds for Arthur's care 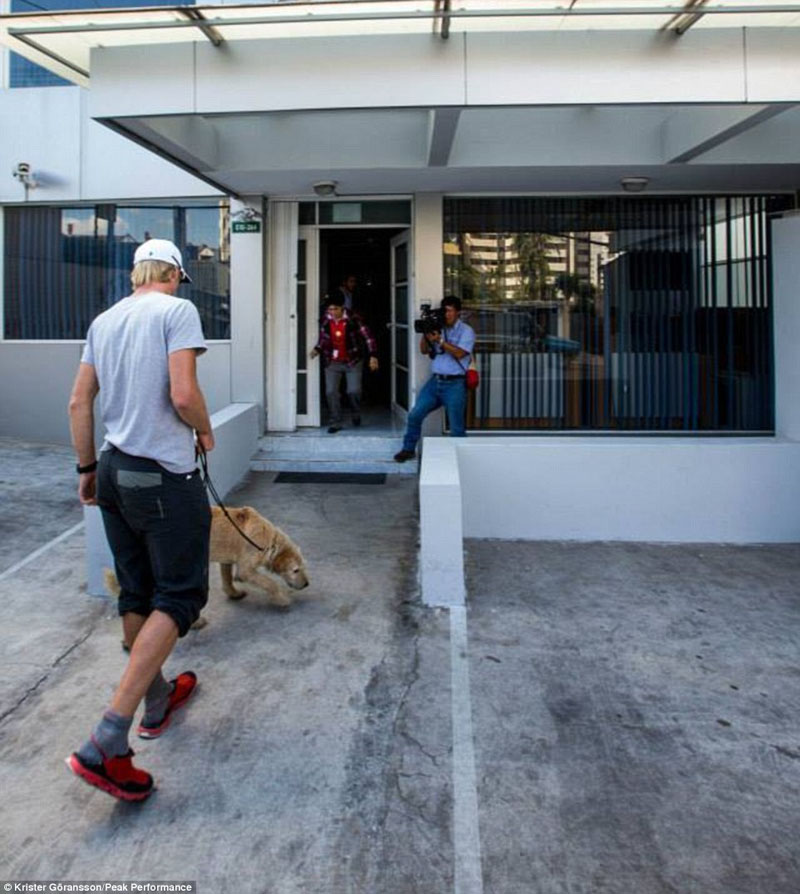 Spotlight: Team member Staffan Bjorklund takes Arthur for a walk outside the clinic. Their story had already grabbed the attention of the media 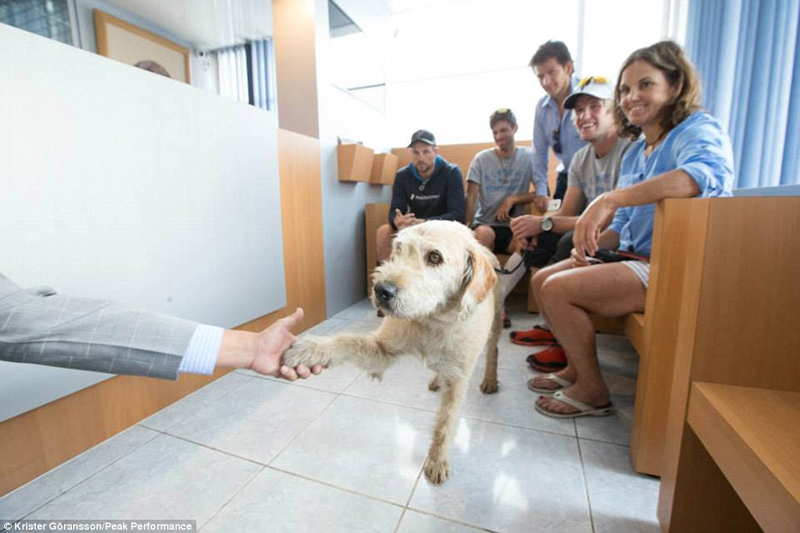 Greeting: Arthur offers out his paw to one of the vets as the team wait in the clinic for him to be checked over 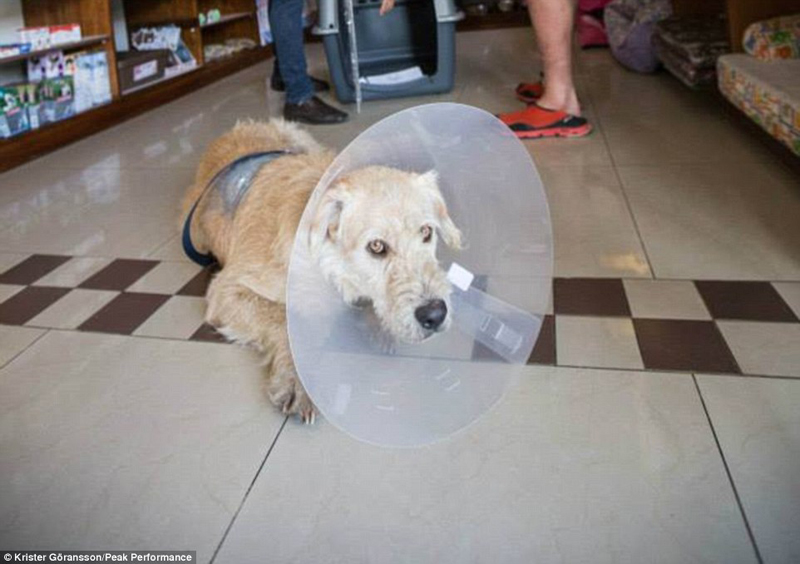 Aftermath: After the procedures were complete he was forced to wear a cone on his head. It was then that Lindord decided to adopt him and take him back to his family in Sweden 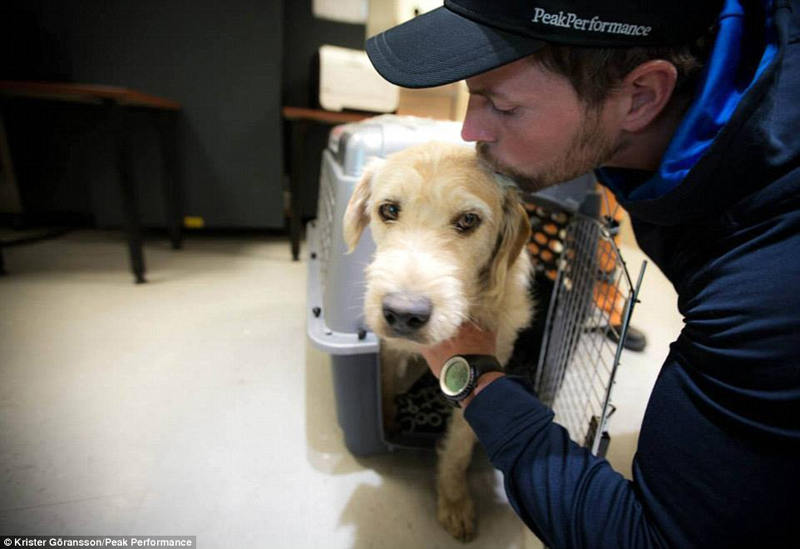 Emotional: When Lindord received news that the Board of Agriculture had approved his request for Arthur to be brought back to Sweden, he said he cried while looking at the computer 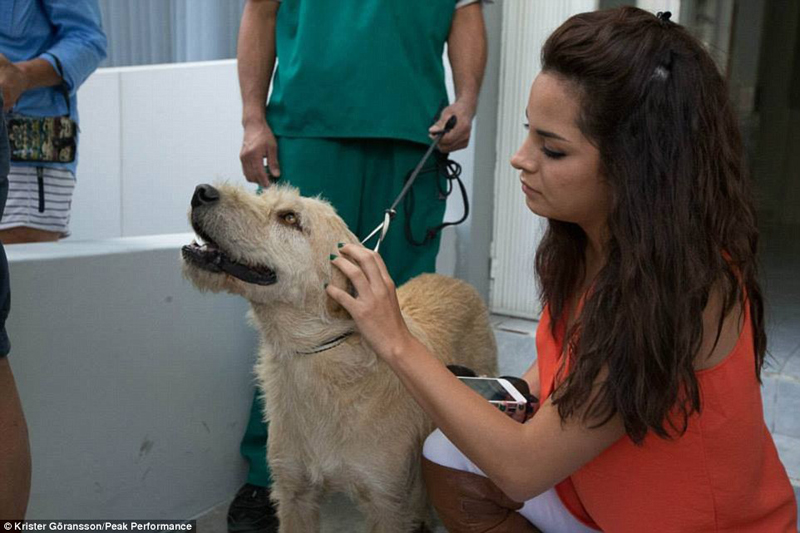 Happy: Despite his injuries and the toll the final two stages of the race had taken on him, Arthur began to look healthy as he prepared to fly to Sweden and settle into his new home 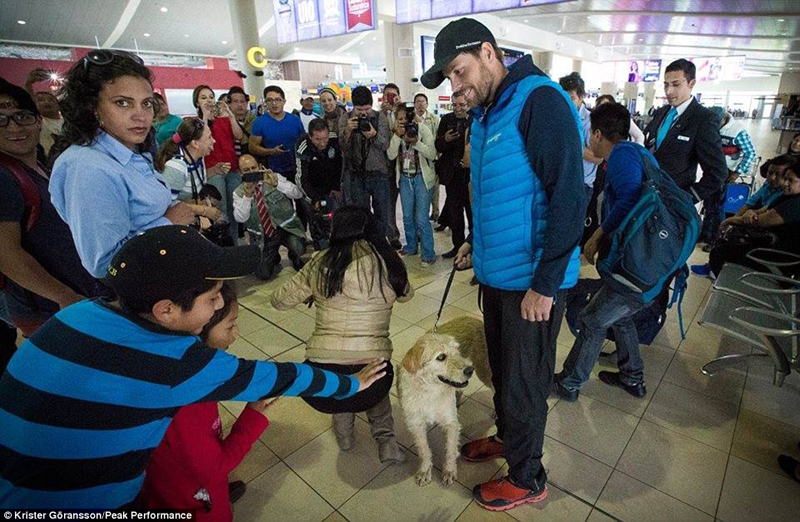 Attention: The team let passengers stroke Arthur as he wondered around the airport terminal before their flight back to Sweden 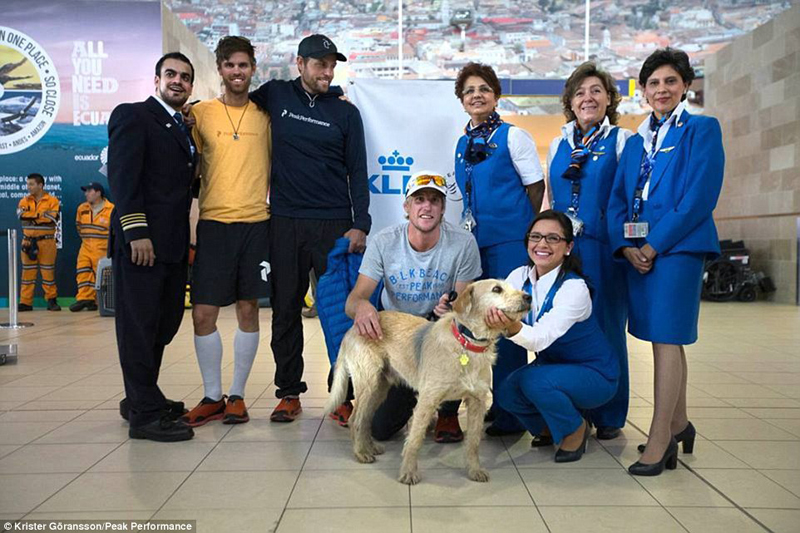 Pose: Members of the team stand alongside with flight attendants and a pilot as they prepare to take Arthur home to his new family.

Top 20 Mistakes No 6
Mistake No 6: Not Spaying or Neutering Your Pets Millions of dogs and cats end up on the street or

WOOLIES HAS ALL THE SPOILS FOR YOUR FURRY FRIENDS
For the unconditional love they give us, the snuggles and companionship, our pets deserve the world

VIDEO Cat Seizures from Tick and Flea poison
Summer is the most prevelent time for fleas to invade your home and of course - your pets, but ticks