In October 2012 the NSPCA received information about a veterinarian who had severed one arm and both legs of a monkey and was holding the mutilated animal alive in her bedroom, without any pain medication.  Upon discovering the gruesome act of cruelty to be true, they also saw the poor animal had a massive incision in the abdomen.  The monkey was removed from the premises and humanely euthanised.

Was this gross animal abuse and torture, or do the authorities see it as a poor case of vivisection experimenting?  What went on in the mind of the person doing such a crazy act of cruelty and why are the authorities dragging their feet on the matter?  All the questions and we would like answers.

The NSPCA fought this case for eight years and it finally went to trial in 2020. 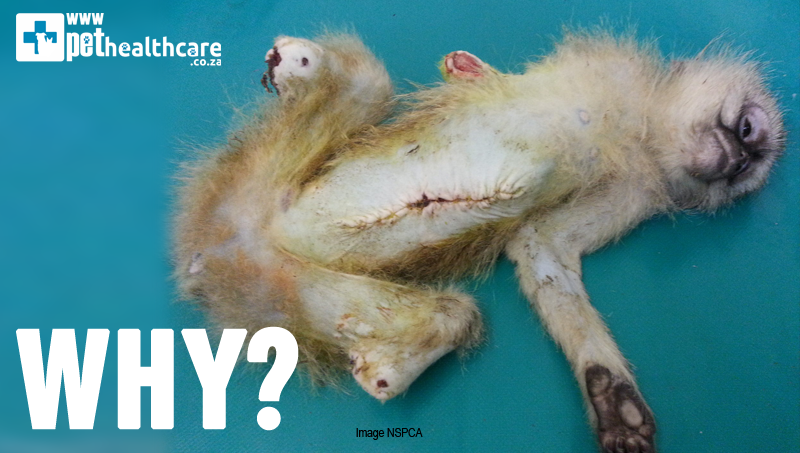 The National Council of SPCAs (NSPCA) welcomes the guilty judgment against Dr. E Alberts for the mutilation of a monkey. Dr. Alberts was found guilty on counts of animal cruelty, obstruction, and illegal possession of an indigenous wild animal.

In October 2012, the NSPCA was made aware that Dr. Alberts was in possession of a vervet monkey that had had three of its limbs amputated. It was reported that the animal was in pain and distress and a warrant was obtained.

On arrival, the NSPCA Inspectors were refused entry onto the property and required police intervention to gain access. The Inspectors were further obstructed after gaining access, and only after threats of arrest, Dr. Alberts begrudgingly complied.

A female vervet monkey was found in a cage in the bedroom of Dr. Alberts. The monkey’s two hind legs and one forearm had been amputated and she was dragging herself around with her remaining forearm. She also had a deep incision on her abdomen. The monkey was removed and taken to an experienced veterinarian for an examination. It was decided by the veterinarian that euthanasia was necessary to end the monkey’s suffering and her body was sent for a post mortem.

Charges were laid in terms of the Animals Protection Act No 71 of 1962 for maiming, neglect, failure to administer pain medication, as well as obstruction and illegal possession of an indigenous wild animal. Dr. Alberts was found guilty on all counts in the Nigel Magistrates Court on 4 March 2020. Sentencing is set for 18 March 2020 at 12h00.

The NSPCA reported this matter to the South African Veterinary Council (SAVC) and were advised that they would wait for the outcome of the case before taking action. The NSPCA expects the SAVC to now take action against Dr. Alberts in light of this judgment.

“It has taken nearly eight years for justice to be served for the monkey that was so terribly abused at the hands of a veterinarian who, by their chosen profession, should have had the animal’s best interests at heart. The NSPCA will never give up on seeking justice, no matter how long the justice system takes – every animal, and each case, matters to us” said Meg Wilson of the National Council of SPCAs. 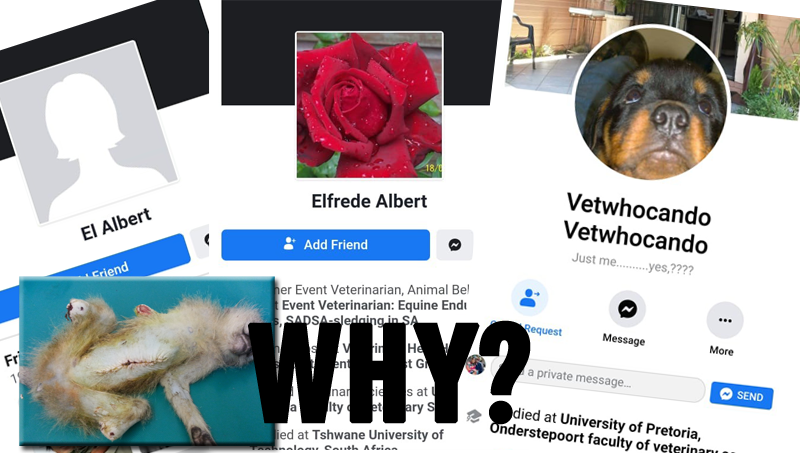 We decided to contact Dr. Elfrede Alberts.  It was a little difficult to find her on Facebook because she has 3 inactive Facebook profiles.  It seemed like after 2014 she refrained from updating her newest profile - Vet Who Can Do, but during that time, her affinity for animals and in particular the husky breed.  When phoning her in February 2020 on the numbers listed in her profile, the person who answered referred us to her legal team in Benoni.  To date, we have not heard back from the legal team.

One begs to question why would someone who is seemingly so caring for animals, do such a horrific act of cruelty to a monkey?  Was it experimental research or was it pure torture?  It is a question we have asked a few times over, but yet wait to find out.  Either way, no living being deserves such a fate. 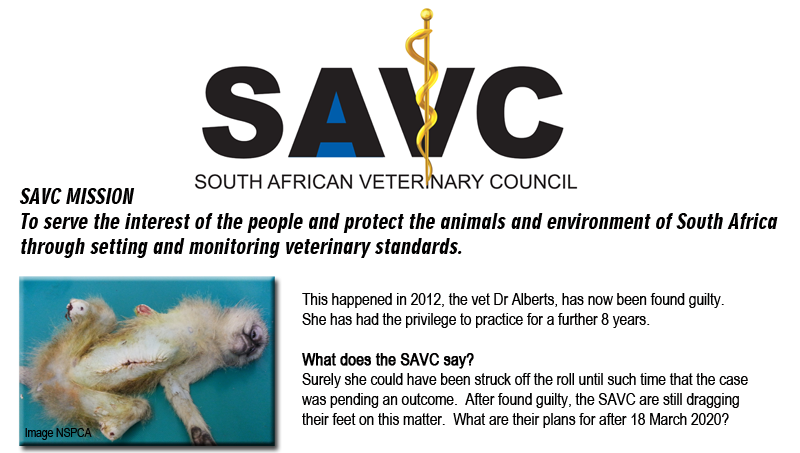 The NSPCA has shared the outcome of Guilty For Maiming a Monkey to the SAVC and have asked them to act on the verdict.  Nothing was done on their side after receiving this news from the NSPCA, which is why we contacted them and asked for their reasoning.

Their feedback is as follows:

Council received a complaint of unprofessional conduct against Dr Elfrede Alberts at the end of 2012 emanating from the amputation of three limbs of a vervet monkey. The investigation was held over in accordance with section 31(1) of the Veterinary and Para-Veterinary Professions Act, Act 19 of 1982, on request of Dr Alberts’ legal representative pending the finalisation of the criminal charges in terms of the Animals Protection Act, Act 71 of 1962, which the NSPCA filed against Dr Alberts.

As the criminal proceedings have now been concluded, but for sentencing, the Council already commenced the relevant steps in accordance with the rules and regulations which were in effect when the incident occurred. The relevant Committee of Council, the Investigation Committee, has resolved to rescind the previous decision to hold the matter over pending the outcome of the criminal proceedings. Should Dr Alberts be found guilty after an investigation into her alleged conduct and an unprofessional conduct inquiry (hearing), the members of the Inquiry Body will have to decide on an appropriate sanction, having regard to all the relevant facts and circumstances.

There was a decision made to censure the vet by the SAVC, but they have since then decided to overturn that decision - by law this can only be done if the person (Dr. Alberts) was not present at the said hearing.  There are two cases happening here at the same time, one is a Civil and Professional case, and one - a Criminal Case - where the state has made their decision.

Having looked at the Mission and Vision of the SAVC membership, it appears that they have jurisdiction from a civil and professional side to stop this vet from practicing any further, yet they are holding their verdict - and await the sentencing of the pending criminal case.  Accordingly, there is (by law) no need for them to wait for the criminal case to finalise, and we ask why they have not yet taken a stance against Dr. Alberts for gross neglect and animal abuse and strike her from the roll?  It could have been done eight years ago when the notice was given of such poor conduct. 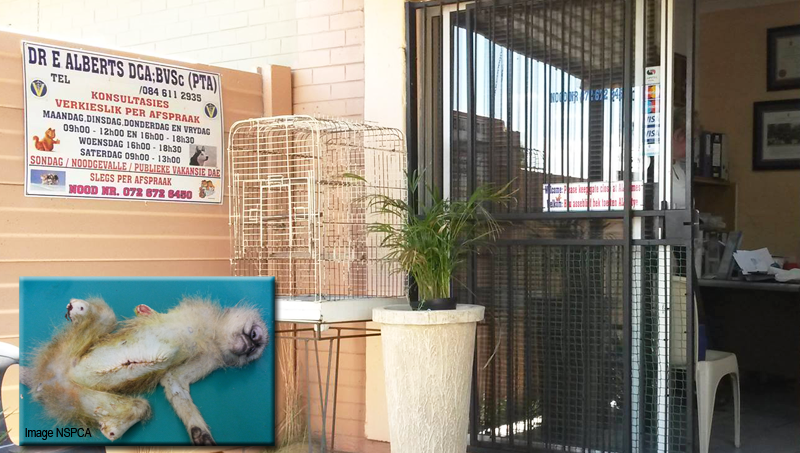 WHAT WOULD WE LIKE TO SEE FROM THE SAVC?

The outcome has been given as Guilty for Maiming a Monkey - but is this - in the eyes of SAVC, in fact, animal abuse?  We, the custodians of animals and their welfare wish to ask the SAVC to strike Dr. Alberts from the roll irrespective of the Criminal sentencing outcome regarding her case against the NSPCA  - without further delay.  And we thank them for taking action against gross animal abuse.

If you agree with us, you are welcome to CLICK HERE and contact the SAVC and ask them to do the same.

Introducing a new cat to your dog
Contrary to belief, cats and dogs can get along if introduced appropriately. A gradual introduction

Dog Walk at the Cape Outdoor Expo 27 Oct 2013
CALLING ALL SOCIAL DOGS ON LEADS TO ENJOY A DAY OUT IN THE COUNTRY! Sunday, 27th October | Cape Out

Hill’s collectable kitty tins - free this September
Its #FreebieFriday [12 September 2014] and we have 4 pawsome Kitty Tins up for grabs! Product :

Japanese Legend explains how you can find your lost kitty
There is a Japanese legend who talks about a method to find cats that have left the house and never...

101 Crating a pet after Surgery
Having been through this ourselves, we know few things are worse than hearing the vet say those...

New oncology centre for animal treatment and research
The University of Pretoria’s (UP) Faculty of Veterinary Science and the Southern Africa Animal...

SPREADING THE TRUTH ABOUT RABIES – NO MORE FEAR, JUST THE FACTS
Johannesburg, 22 September 2021: This year’s 15th annual #WorldRabiesDay on the 28th of September...