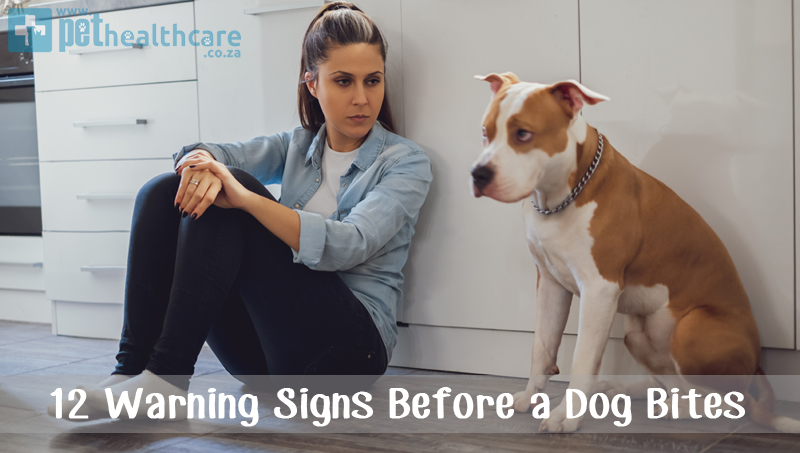 Understanding dog behavior and being familiar with the warning signs could avoid being bitten and go a long way in ensuring a positive outcome of a possibly threatening encounter with a dog.

Many bites happen with dogs that are familiar, and most bites are related to attempting to interact or interactions with a dog, i.e., playing, restraining, stroking, handling, etc. If you are not paying attention to the warning signs or do not understand dog language, your friendly family dog might quickly turn aggressive because you did not understand what they were trying to tell you. For more relevant information about dogs, also read 20 risky mistakes that dog owners make.

Here are twelve warning signs before a dog bites that could mean the difference between getting bitten or not.

12 Warning Signs Before a Dog Bites

The dogs seem stiff or tense with his ears pulled back, his tail tucked between his legs and his lips pressed tightly together. These signs indicate fear and if pushed, he would bite.

In this case, he may appear tense and puffed up with his lips pressed together, his tail and ears raised. He will look right at you. This behavior signals domination or intimidation, ready for a fight.

When a dog is following you with his head low, stiff demeanor and stares intently at you, it is not a good sign. Some dogs display this behavior when they are playing which is usually different because they will have a relaxed demeanor and playful bow. If the dog is not playful but is stalking you, it is usually a sign of predatory behavior and could end up in a bite.

Whenever a dog is growling at you for no apparent reason like a game of tug of war, it is safe to assume he is ready to bite, unless told otherwise by his owner or someone that understands his behavior and knows him well.

Once a dog raises his lift and bares teeth, it is generally a sign of aggression. Unless he is an Australian Shepherd that simply grins because he’s happy.

Some dog breeds, for example, border collies have a tendency to stare, however, on many occasions, the stare is not accompanied by tense behavior. A dog that stares at you intently and looks tense, is usually a sign of aggression.

When a dog is trying to run away from you, it is best to leave him be. Fearful dogs will try to flee at first, however, if they feel cornered or threatened in any way, they will lash out. Always use encouragement to gain a fearful dog’s trust instead of pursuing them to encourage interaction, unless you are a trained professional in animal behavior. For tips on how to approach fearful dogs, read here.

5 Instances Where a Bite Can Be Provoked

8. Approaching a Dog That is Eating

When dogs are chewing on bones or eating, it is best to leave them be. Teach your kids to stay clear until he has finished their meal or chewing their bone.

When male dogs are mating or trying to when a female is in heat, it is best not to interfere.

When you are approaching his yard or home and the canine does not know you and his owner is away, he might turn aggressive. If you are planning on visiting and the dog is prone to become aggressive towards strangers,  ask if the dog owner is home or ask them to confine him to a crate or another area when you’re visiting.

11. Getting Between Him and Something He Wants

Dogs will attack if you are interfering, trying to break up a dog fight, or getting in between them and something they are after.

If you are doing something that makes a dog feel uncomfortable or defensive, like tackling him, he will retaliate and act defensively.

Caring for your pets this Winter
Winter has arrived in Cape Town, and just as we hall out our thick winter woollies and blankets – so

How to photograph your pets
I’ve had a few people write in and ask me questions about photographing their pets.  With some resea

Vetiquette 101: What your vet would like you to know
Visits to the vet can be traumatising, but they do not have to be if you go prepared. Pet ownership

Video: Conventional cancer treatment by the medical industry is not working - and is a failure.
**Comment from Vondi's Holistic Pet Nutrition – "The same struggle against cancer in humans applies

Saying good bye
Our pets are in our lives for many reasons.  The most of us have pets because we love them as compan