The NSPCA is now able to legally prosecute anyone without having the delay of the NPA process.  We were delighted by this announcement from the Constitutional Court and look forward to seeing these many acts of cruelty and abuse being stopped in their tracks by the SPCA in South Africa. 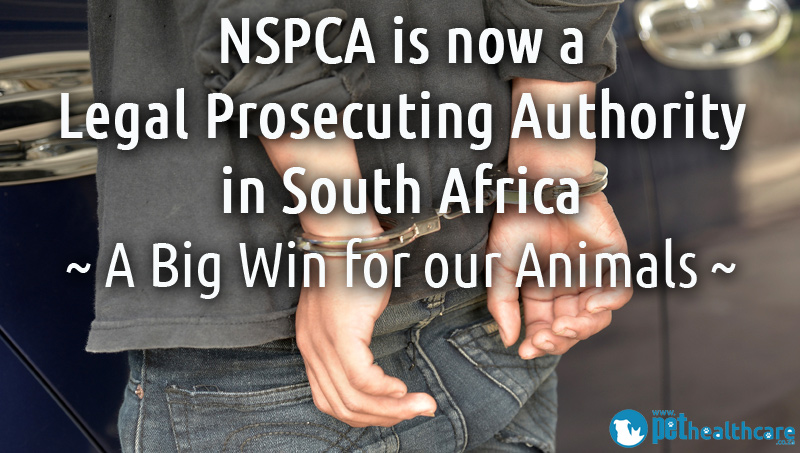 The NSPCA only prosecutes where it has tried to educate or negotiate and failed, or when in the face of intentional, blatant cruelty. Therefore when the National Prosecuting Authority (NPA) declines to proceed with our cases, we are hampered in our mandate to fight cruelty and to promote humane treatment of animals.

Together with our legal advisors we took a decision to approach the High Court in Pretoria to enable us to institute private prosecutions in cases where the NPA declined to prosecute.  Our Application was dismissed. The Supreme Court of Appeal (SCA) later upheld this ruling, stating that to allow the NSPCA to proceed with private prosecutions would effectively create an alternate prosecution system.

The example provided in our papers related to the cruel and inhumane slaughter of a camel during Qurbani, which was undertaken in a manner completely contrary to the precepts of Islam.

This was not the only case where the NPA had declined to prosecute our cases. It is an all too frequent occurrence, and the cases which fell by the wayside included those relating to ostrich toe clipping, rodeo, dairy farms, crocodiles held in single pens and an abattoir causing suffering during slaughter.

The matter was then taken to the Constitutional Court and was heard on 23 August 2016. The issue in dispute is Section 7 (1) (a) of the Criminal Procedure Act which allows any private person to apply for permission to privately prosecute whoever they believe committed an offence against them where the NPA refuses to pursue public prosecution. This section however does not accord organisations, termed as “juristic persons”, that right.

The National Council of SPCAs (NSPCA) is mandated to act in the interest of animals, to take appropriate action to protect them, and to promote their humane treatment by man. It is however a juristic person. For this reason, the NSPCA challenged the legal system in our country in our endeavours to fight for the power to prosecute privately.

Advocate, Kevin Hopkins, acting for the NSPCA, summed up the reason for our application when he stated that “the purpose behind private prosecutions is to ensure that people who commit crimes do not go unpunished simply because the National Prosecuting Authority (NPA) declined to prosecute.”

In its court papers, the NSPCA argued that there was no rational basis for treating organisations differently from human beings in the realm of private prosecutions.

Judgement was reserved after argument, and handed down on 08 December 2016. 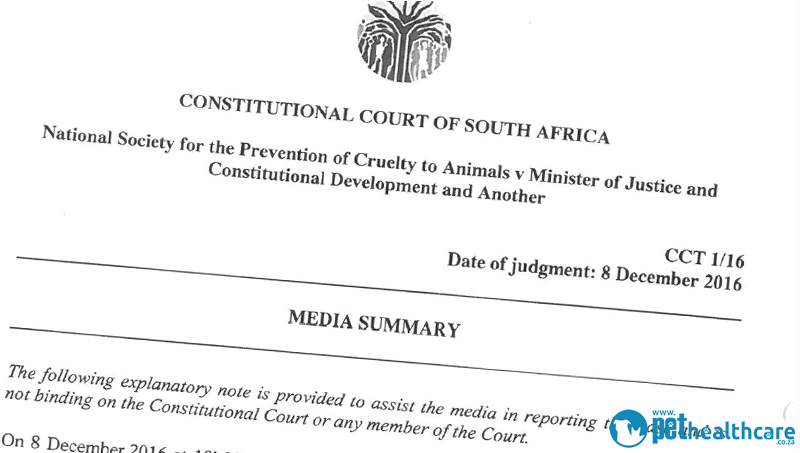 CONCOURT RULES IN FAVOUR OF NSPCA

In a unanimous judgement handed down by Khampepe J on 08 December 2016, the Constitutional Court of South Africa set aside the decisions of the High Court (Gauteng Division, Pretoria) and the Supreme Court of Appeal and ruled that the NSPCA has the statutory power to institute private prosecutions, which power is conferred upon it by section 6(2)(e) of the Societies for the Prevention of Cruelty Act 169 of 1993 read with section 8 of the Criminal Procedure Act 51 of 1977.

The ConCourt also ruled that the Respondents – The Minister of Justice and Constitutional Development and the National Director of Public Prosecutions – were to pay the NSPCAs  costs in all three applications, including costs of 2 Counsel.

The NSPCA embarked on this course of legal action in late 2010 in the belief that perpetrators of animal abuse should be not allowed to get away with their crimes simply because the State prosecuting authority declines to proceed with cases against them. The case challenged the existing legislation in an endeavour to obtain the power to prosecute privately. People who commit crimes against animals should not go unpunished.

Our decision to pursue this matter to the highest authority in our country was justified. We feel vindicated and consider this a notable victory for the welfare of animals in South Africa. We shall not let them down.

The judgement recognised that the NSPCA is best placed to conduct such private prosecutions, and to give effect to enforcing the offences set out in the Animal Protection Act.

“It is noted that the National Council of SPCA’s power cannot be divorced from its functions which are intrinsically connected to protecting animal welfare and preventing associated offences.”

Of great significance is the recognition of the sentience of animals and the importance of animal protection and welfare.

Appreciation is expressed to all who undertook and pursued this action. Special thanks are given to our legal team, Advocate Kevin Hopkins, Advocate Sandra Freese and Dr Jane Marston, who is also the Vice Chairman of the Board of the National Council of SPCAs.

Media Statement from the Constitutional Court of South Africa

Help #FeedAPet with BOSS and PETLEY’S
The Festive season is almost upon us, and although it may be festive in many households across the c

5 Languages of Appreciation in your Pet Business
Do you want to take your pet business to the next level?  Are there frustrating moments that you oft

10 Tips for taking your pet to the beach this summer!
1. Always keep a watchful eye over your dogs when at the beach and keep them away from waves if the