The NSPCA’s Special Investigations Unit was involved in another successful raid on a dog fighting operation on Saturday 27 August 2016 when 9 severely injured dogs were rescued and 10 people were arrested. 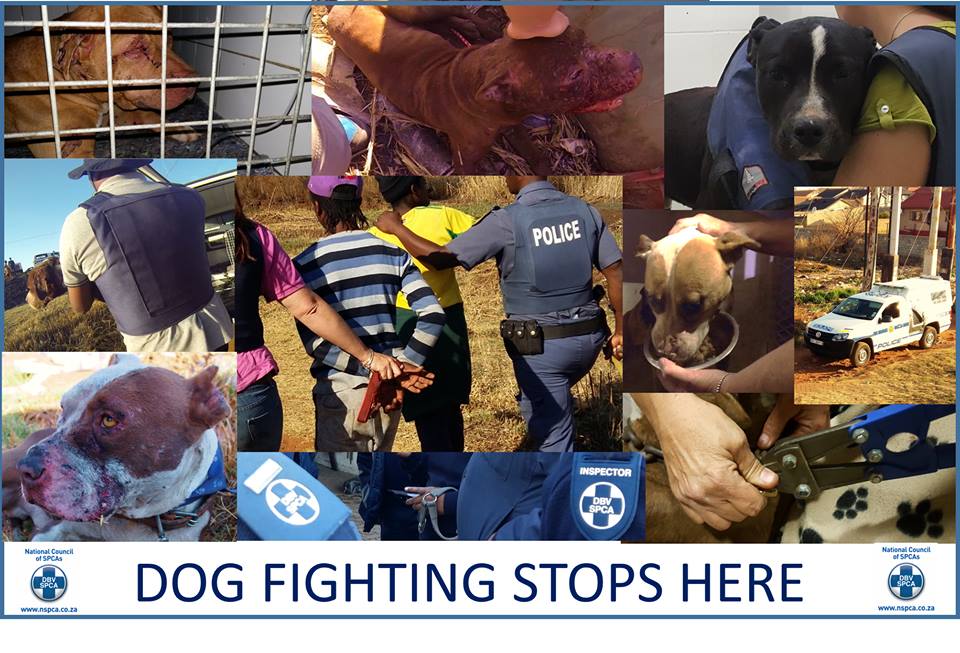 Assisted by members of the SAPS, personnel from the NSPCA’s Special Investigations Unit proceeded to the area where a gruesome scene was found. A group of people had converged in an area of secluded veld in Dobsonville, Soweto, and fighting was underway with dogs. Dog fighters fled, abandoning their dogs. They were pursued and apprehended by the police officers.

The NSPCA intervened immediately to separate the dogs that were still engaged in fighting and then to provide emergency care for dogs that had been severely injured in earlier fights.

Dogs were found in a state of collapse, some suffering from broken legs, blood loss, shock and dehydration. The injured animals were removed from the scene and taken for veterinary assessment. Sadly some of these brutalised dogs did not survive. The remaining dogs are undergoing veterinary treatment and will remain under the control of the NSPCA for safekeeping.

Criminal charges have been laid in terms of the Animals Protection Act No.71 of 1962 against those arrested.

The public is assured that the case will be pursued to its full extent, as we seek justice for the animal victims of this horrific crime.

This joint operation between the NSPCA and SAPS was highly effective and we thank the SAPS for their support especially in terms of rapid response.

There is a possibility that the dogs involved had been stolen. An appeal is therefore made for anyone whose pit bull is missing – especially if stolen in the Soweto / Greater Johannesburg area - to contact the NSPCA’s Special Investigations Unit with a photograph of the missing dog. Please email details to specialinvestigations1@nspca.co.za so that we may check against the dogs seized at the raid.

The NSPCA will NEVER under any circumstances reveal the identity of an informant so the public may come forward with information with confidence in this regard.

Dog fighting is barbaric and illegal. The NSPCA team is ready to act and react at all times. Raids are fraught with danger yet our tireless pursuit to end this brutal activity is unwavering and steadfast. We have no doubt that all caring people will stand with us to support the Special Investigations Unit’s dedication to combatting the scourge of dog fighting in our country.

What To Know Before Adopting a Second Pet
Owning a pet is a wonderful experience. Whether you have a dog, a cat, or another type of pet, they

Routine for Pets is very important
The importance of routines and mental stimulation for your pet Just like our human children, a rout