The Western Cape is the only place in the world where the Western Leopard Toad can be found.  This endangered amphibian needs our attention and care urgently, especially during toad breeding and migrating season July to September every year. 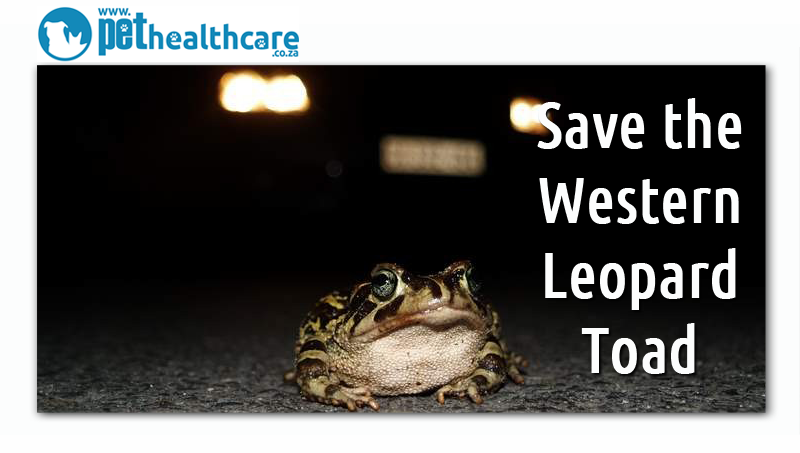 Pet owners also need to take special care of their pets during this breeding season.

Here are some tips for pet owners during breeding and migrating season.

If you have a terrier breed, or your pet has a history of attacking toads, consider keeping it inside during toad breeding season (July-September) and toadlet emergence (November-January).

Find out if you have leopard toads in your garden and be conscious of their behaviour and where they tend to move or like to be. This way you can keep your pets away from the toads.

Be conscious of your pets movement if it roams, because as the vets indicated, vehicles and other humans pose a far greater danger to pets. 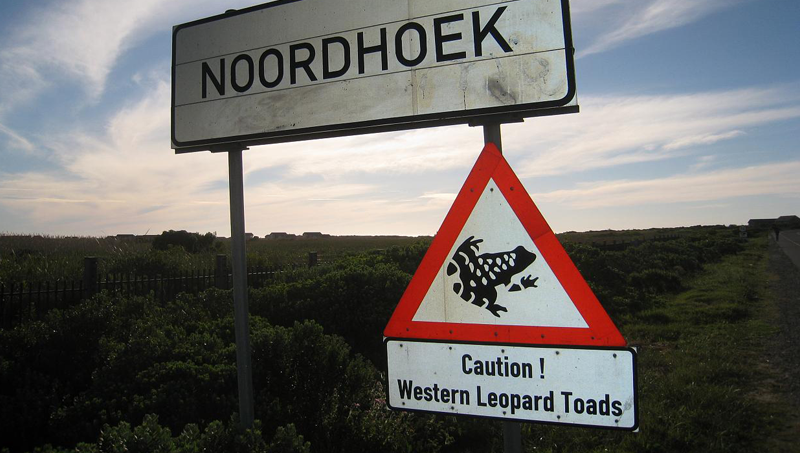 The Western Leopard Toad lives in Cape Town and the Agulhas Plain. As such it shares its home with millions of Capetonians. As toads go, it is larger than most and exquisitely marked. It happily co-exists with humans in the suburbs, and would be just another beautiful inhabitant of Cape Town if it were not for the fact that it is an explosive breeder!

Every year, for a few days usually in August, toady goes a courting. This is unusual in that it is confined to less than a week a year. Thousands of toads migrate to suitable ponds. There the males snore and fight for the females. The females lay their eggs and depart, migrating back to their gardens. The exhausted males follow later when no more females arrive at the pools.

Again, this would be perfectly natural were it not for the fact that we have built roads and highways all around their breeding ponds.

And so every year there is a problem that potentially thousands of toads end up pancaked on our roads.

Fortunately, there are volunteers who, every year while toads only have sex their minds, man the roads, rescuing toads, controlling traffic and preventing a blood bath. We need your help to save our toads. The frenzy lasts for only two to five nights a year, but in that time the next generation of toads is created or doomed.

If you would like to volunteer and be part of the action please call the Western Leopard Toad hotline 082 516 3602 and join the ranks of your local toad volunteer group.

Volunteers also collect indispensible information on breeding times, numbers of toads and breeding sites. This is done while rescuing toads, but you can also contribute out of season: see below. These data are used to determine conservation plans for the following year, to obtain funds, and to update the conservation status of the species. Please help.

We urge motorists to stay alert in all toad areas, especially on roads surrounding breeding sites.

Many thanks to everyone who has helped with the breeding effort over the last few years. Your help saw fewer mortalities than ever before and that is great news for the Western Leopard Toad. 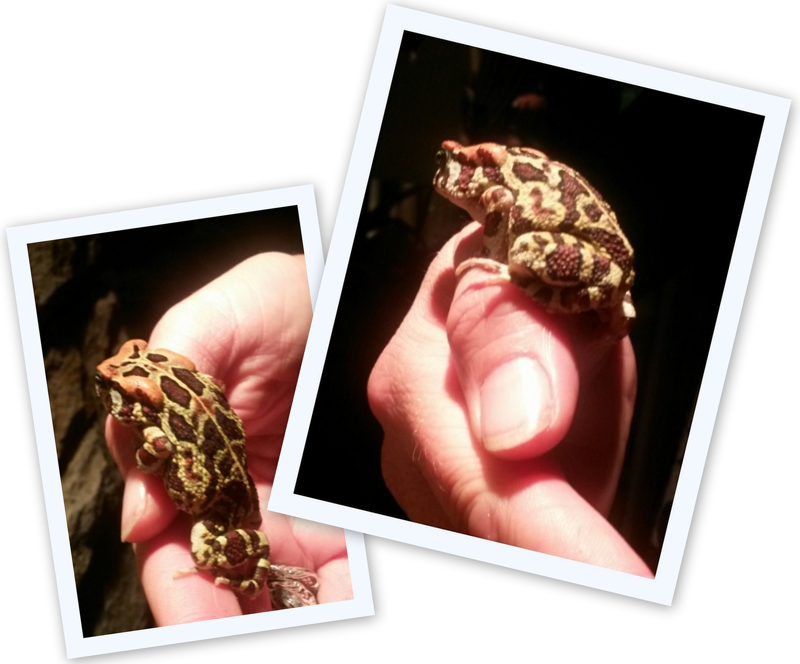 LISTEN TO THE TOADSNORE IF YOU HEAR THIS IN YOUR AREA YOU HAVE WESTERN LEOPARD TOADS BREEDING NEAR YOUR HOUSE! PLEASE LET US KNOW ON THE HOTLINE

You can contribute to citizen science!
We need your photos for our extensive identification project!
Please take a photo of your toad and upload it onto our
UPLOAD YOUR TOAD page on iSpot. 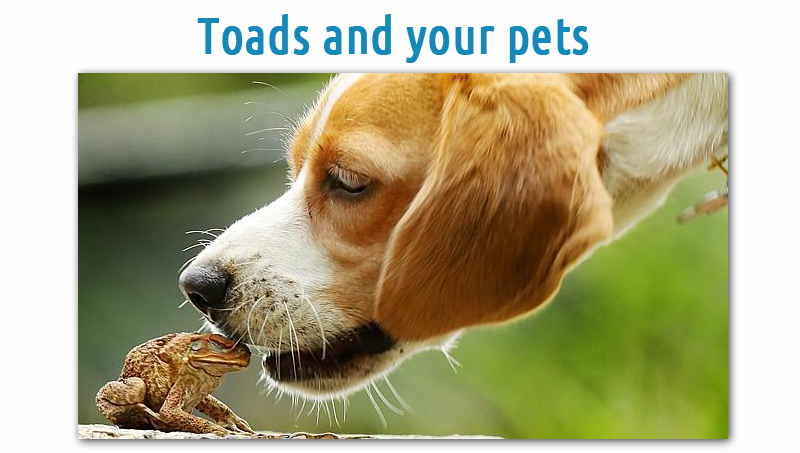 Vets
The Western Leopard Toad Amietophrynus pantherinus lives largely in suburban gardens and thus close to domestic animals.  Some breeds of dogs and cats, especially those bred for vermin control, may take excessive interest in toads.

The Western Leopard Toad, like most other toads, has a toxin gland (called the parotid gland) just behind the ears. The toad secretes this bufotoxins when it feels that its life is threatened, typically when its body is in the grip of a predator's jaws or if the body cavity has been perforated.

This toxin is not of much harm if consumed in small amounts. When copious amounts are consumed, it can however be harmful to the animal and in all cases must be treated. Some individual pets may be hypersensitive to these toxins, just as some humans have allergies to bee stings.

The majority of breeds of dogs and cats avoid toads, as toad skin is exceedingly unpleasant to the taste.  Most animals that once mouth, lick or even smell a toad, will never touch another again.

Symptoms of poisoning
Symptoms of poisoning are typical of ingesting a poisonous. The first sign is foaming and frothing at the mouth, which is a reaction of the saliva.  Most pets attempt to gag or wipe away the foam.  In most cases, this is as bad as it gets, and treatment is merely to wash out the pets mouth.  Where heavy doses are consumed your pet will experience a rapid increase in heartbeats, nausea and a reduced consciousness. In very selected cases, when the animal is hypersensitive to the toxin and consumes large amounts of it, there is a chance that without treatment, the animal can die. Whenever your pet foams at the mouth take it seriously! Wash the dog's mouth out thoroughly with water and take it to a vet immediately.  Unless you have seen a toad nearby, beware of other causes of foaming such as eating rat poison or drinking poisonous substances.

A survey among vets regarding Western Leopard Toads and Pets
The Western Leopard Toad Conservation Committee conducted a survey of 18 veterinary clinics in Cape Town during 2009.
Doctors were asked ten questions specifically relating to dogs.  The results were:

1) How many dogs are brought into your practice annually suffering from WLT poisoning?
Half  (50%) had no confirmed cases, a third (33.3%) have had less than 5 cases.  None had more than 5 cases, and 3 did not answer the question.

2) How many of these dogs died?
Almost 90% (88.9%) of vets did not know of deaths caused by Western Leopard Toad.  Only a single vet had experience of a Jack Russell that had been brought in without any initial treatment (washing out the mouth) by the owner and was unable to be revived. One vet had heard of a death, but not at his clinic.

3) What breeds of dog are most susceptible?
Terrier breeds like Jack Russell's and Staffordshire Bull Terriers.  German Shepherds were mentioned, but no cases have been documented.

4) Are there any "problem areas" or times when poisoning is more prevalent?
About half (44.4%) suggested at night time, when toads are active.  About half (44.4%) noted winter when the toads were migrating and one tenth  (11%) suggested during spring, during the time that toadlets emerge from the breeding pools.

5) How do you treat the dogs?
Cases are treated symptomatically using anti-nausea medication.  Activated charcoal is suggested as well as IV fluid drips.  Lignocaine, diuretics and valium were other substances used in treatment.  This is all standard treatment for poisonous foods and drinks.

6) What do you advise pet owners in terms of prevention and first aid?
You must wash out the mouth with water.  Keep dogs indoors during risky periods.  Other suggestions include:  check water bowls, prevent dogs from playing with toads, and train dogs not to attack toads.

7) Compared to other threats to pets such as vehicles, how would you quantify the threat of WLT to pets?
The incidence is very low: less than 1% of cases.

8) Do people ever bring to your clinic injured toads for treatment?
Almost a third of vets (27.7%) said yes.

9) if yes, what do you do?
The five vets indicated that they use antiseptic liquid to clean the wound, but if it is a serious injury like a crushed head or the body cavity is ruptured or the spine is snapped, as there are no facilities to treat this.

What you should do to prevent a serious pet/toad encounter
Place a stone or two in the pets water bowl to allow the toad to get out easily and not get stuck in it. Alternatively keep the water bowl inside, preventing the toad from reaching it.

The Western Leopard Toad and the law
The Western Leopard Toad (Amietophrynus pantherinus) is a protected wild animal in terms of the Nature Conservation Ordinance No. 19 of 1974. This means that no person may harm, capture, possess, or transport this species, or keep it in captivity, without a permit from CapeNature, the provincial nature conservation authority. No commercial trade is allowed in this species, and any person conducting research on this species requires a permit from CapeNature.

8 Ways to Stop Puppy Biting
Puppies are irresistibly cute until they sink their needle-sharp baby teeth into your soft skin. Th

June 21 is ‘Take Your Dog to Work Day’ in America
We’ve all heard the expression, “working like a dog.”  But have you ever been invited to “work with

Body Language of Dogs and Cats
What does your dog or cats' body language say? The good news is, it can be very easy, and all you n

South African Vet Maims Monkey, but what does SAVC say and do about it?
In October 2012 the NSPCA received information about a veterinarian who had severed one arm and both