26 January 2016:  On the 20th of October 2011 the dog named Warrior (renamed Lilly) was pulled from 1.5 meters under the ground at Luhlaza Secondary School Khayelitsha. The school’s kitchen cleaner called the incident in to the Mdzananda Animal Clinic in Khayelitsha who immediately rushed to the school to save the dog. The principal, Manono Makhaphela, had allegedly ordered two janitors to “get rid” of the stray dog as it was regarded as a nuisance. 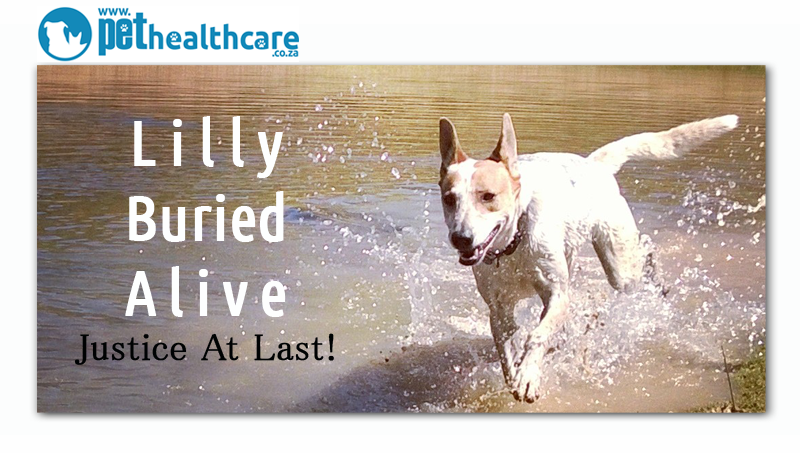 Final Judgement:
After many months of court proceedings and postponements the final judgement took place in June 2012 in terms of which the principal was found guilty. He was charged with a R6000 fine but only had to pay R3000. The other half was suspended for a period of 5 years on condition that an animal protection awareness program was implemented at the school no later than 18th July 2013. Mdzananda highly supported the animal education program as this would enable hundreds of children to be exposed to animals, their needs and how to care for them.

No Action from School:
Unfortunately July 2013 came and no animal program had been implemented. Being frustrated that no punishment had been served the Mdzananda Animal Clinic reported the case back to the National Prosecuting Authority early in 2014. We launched a petition directed at the prosecutor to ensure that the principal complies with his sentence. Over 3000 signatures were collected.

In March 2015 Mr Makhaphela was instructed to appear in court and was given until the 18th of July to start a humane education program if he wanted his criminal record removed.

“It was clear to us at Mdzananda that Mr Makhaphela was not implementing the education program due to a lack of knowledge about animals. He needed assistance,” said Marcelle du Plessis, Fundraising & Communications Manager.  “Louise van der Merwe from The Humane Education Trust was contacted to assist. The intervention by Louise was phenomenal.”

Two two-day workshops were conducted where 11 delegates attended the Humane Education Trust training at Luhlaza Senior Secondary School. A vast number of interactive sessions and topics were covered including ethics in my classroom, home and community, the role I play, animal welfare, dog fighting, animal diseases, animal empathy and more. Topics on handling pressure and bullying were also addressed. Recourses to use in classrooms were shared including posters, DVD’s and worksheets.

After the workshops Louise said, “I can report that Mr Makhaphela was hospitable and cooperative to our team at all times. The staff at the school were friendly and welcoming and the caretaker’s dog, Rover, is happy and friendly.”

Change and progress for the school

Feedback from Mr Makapela also showed enormous growth and change. “It is hard to explain but I used to take the suffering of animals – dogs, chickens, pigs – for granted. I thought it was just the way it was. But after the workshops I found myself noticing every animal. Before I do not think I even saw them and if I did, I did not want to. Now I see them and find myself looking to see if they need help. I realise now that animals have a life to live as well – whatever animal they may be.”

He continues to speak about how the course helped him. “The workshop on bullying and stress was just brilliant. The facilitator was able to make me make sense of what I deal with on a daily basis. For example I was unaware that the learners who continually misbehave need my assistance and not punishment. It is this change in perception that has enabled me – today for the first time – to deal effectively with misbehaviour in a harmonious manner.”

Mr Makhaphela said that he is aware that there is no quick fix to the issues tackled in the workshops. In order to give the learners at his school the chance to become acquainted with Humane Education on an on-going basis, he will initiate an annual art exhibition by learners in the school depicting their social conscience and responsibility concerning the animals in their care. This will make children aware of and interact with issues of animal cruelty and kindness.

“We are pleased that Mr Makhaphela has taken animal welfare on board at his school to the benefit of everyone,” said Mrs du Plessis. “At the Mdzananda Animal Clinic we embrace empowerment of the community. We work in the community for the community. Our belief is that a community that loves animals is a healthy community. Through loving an animal one learns respect for life, non-violence, responsibility, compassion and companionship, things that are often not taught in townships. These spill over to all aspects of life. With Mr Makhaphela’s new approach he will be able to influence numerous young people in his community on a daily basis.”

The Mdzananda Animal Clinic is grateful for the partnership with Louise van Der Merwe and the Humane Education Trust. We have witnessed the change in Mr Makhaphela and believe that the intervention has created a long term change for him, his staff and his students, not simply a short term punishment.

Lily on the other hand is smiling with joy. Lily was adopted by Helen Walne who said, “When I adopted her Lily was already on the road to recovery, thanks to the care and love she received at Mdzananda. She had been going for regular acupuncture and hydrotherapy sessions to try to heal her fractured spine which expert vets deemed inoperable. We were told her chances of walking were 50/50”.  Not too long after Lily took her first proper steps.

Now, Lily is fully recovered and making up for lost time. “She loves her regular forest walks where she crashes through the trees, laps water from streams and dashes along the paths, her tail wagging and her big wing-nut ears pricked,” says Helen. “She loves the beach, where she drags kelp along the shore and flings it into the air. She has gained a reputation in our local park as the dog that climbs trees. I am often told how lucky Lily is to have found us. I think of it the other way: we are so lucky to have her in our lives.”

Dogma Dog bowls prevents Bloat
Welcome to #FreebieFriday!  Today we feature a product that could save your dogs life.  *This compet

Why Dogs Live Less Than Humans
Here's the surprising answer of a 6 year old child. Being a veterinarian, I had been called to exami

Fact or Myth: A dog's mouth is cleaner than a human's mouth
Here’s the myth that makes dogs sound like a dental miracle:  "Despite all the leftover macaroni, ru

Do animals also want a Christmas Pressie?
The night before Christmas a very special moment happens that only the dog sees. At first he is not

Pet-friendly Easter treats
Before you splurge on Easter treats for the family pets, be warned - chocolate can kill.  “Chocolate