Mandela Day 18 July 2014 – a day where everyone is urged to give 67 minutes to better the world around them. Teddy Sambu took this challenge to the next level without even planning to do so. 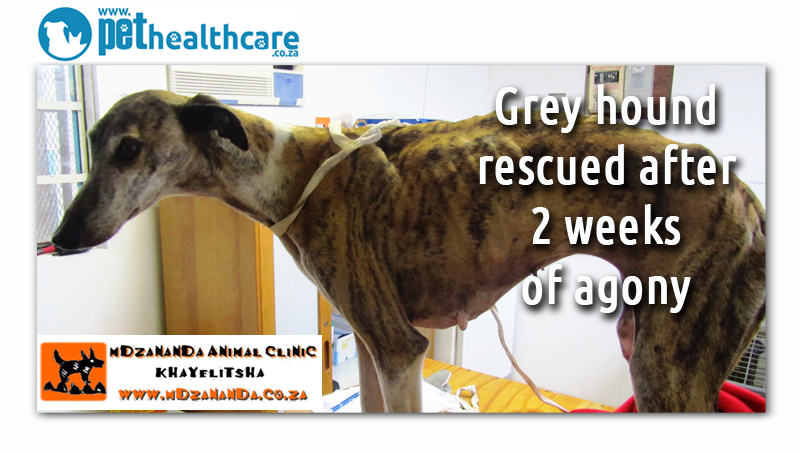 In celebration of Mandela Day the Mdzananda Animal Clinic Khayelitsha held a kennel building event on the 18th and 19th of July for corporate groups and members of the public. Around 150 people joined the event over the two day period.

Around 11am on the 19th of July Teddy Sambu, a Khayelitsha community resident, visited the Mdzananda Animal Clinic with a camera in hand. Teddy had captured pictures and video footage of his rescue mission that morning. He is a professional photographer for Woolworths. 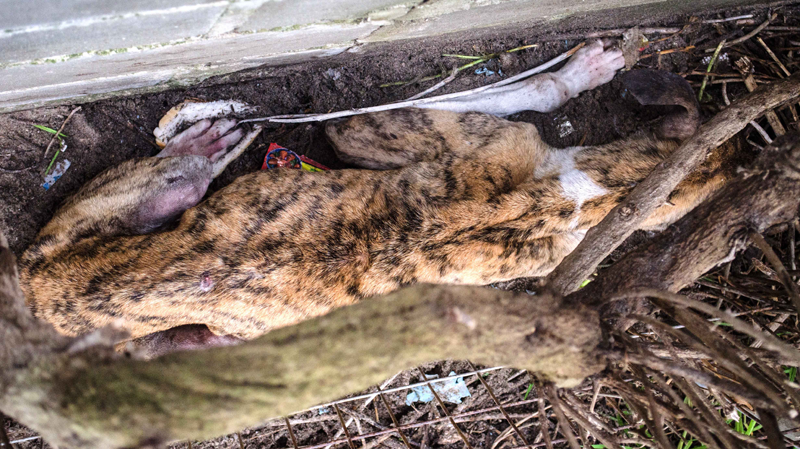 “For the past two weeks I have been hearing a terrible screaming sound at night. I thought it was the neighbour’s cat and got more and more annoyed every day. It makes me very angry when people do not look after their pets,” he said. 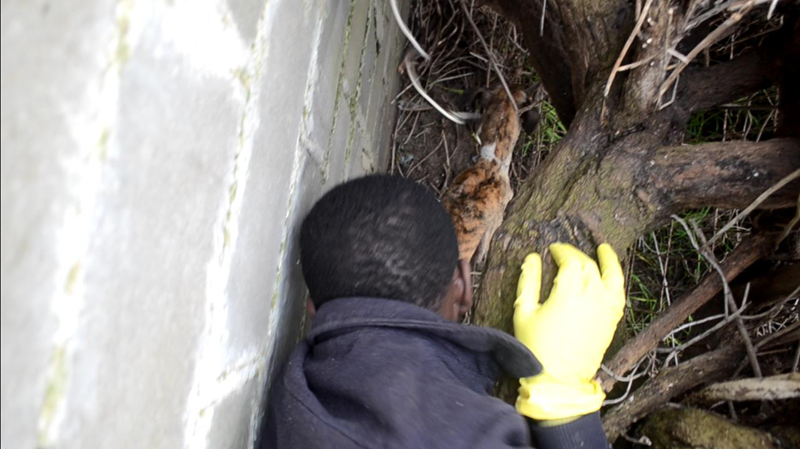 After two weeks no sleep due to the terrible noise at night he decided to investigate. What he saw was beyond belief. “I climbed onto the roof of my house to get a better look at what was going on. A large breed dog had got himself stuck in between bushes behind a school yard. He could not move.  This poor dog had been stuck there for two weeks.” He gathered some of his friends and they started their rescue mission. They dropped ropes down and hooked them over the dog’s head and body. With a lot of struggle they hoisted the dog up and out of the bushes. The dog was extremely scared and very skinny. It had spent two weeks stuck in the rain and cold without any food. 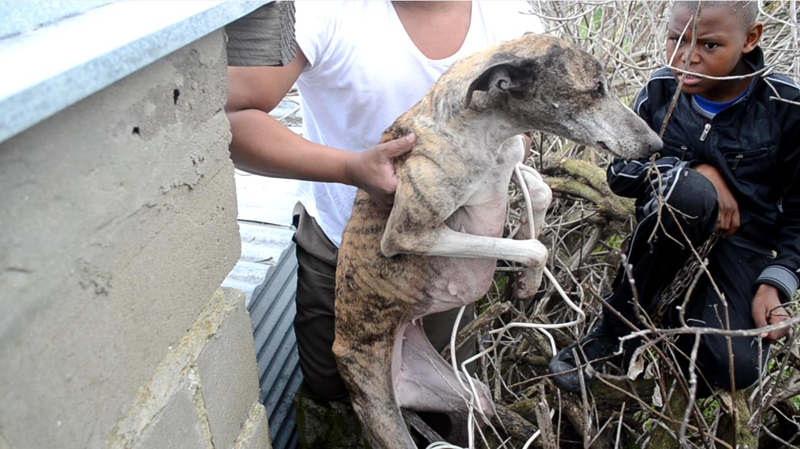 Teddy rushed to the Mdzananda Animal Clinic in Khayelitsha to ask for assistance. Lazola Sotyingwa, one of Mdzananda’s Animal Welfare Assistants and some volunteers rushed to Teddy’s home to collect the dog. “Here are the photo’s I took of my Light Warrior” said Teddy before leaving to fetch the dog.

The dog, a beautiful Greyhound female of approximately 10 years old was brought to the Mdzananda Animal Clinic for a check up by the clinic veterinarian. She was immediately covered in a blanket, given some food to eat and given a lot of love. The veterinarian confirmed that she was physically fine and just needed a lot of love to restore her spirits as well as some good nutrition. 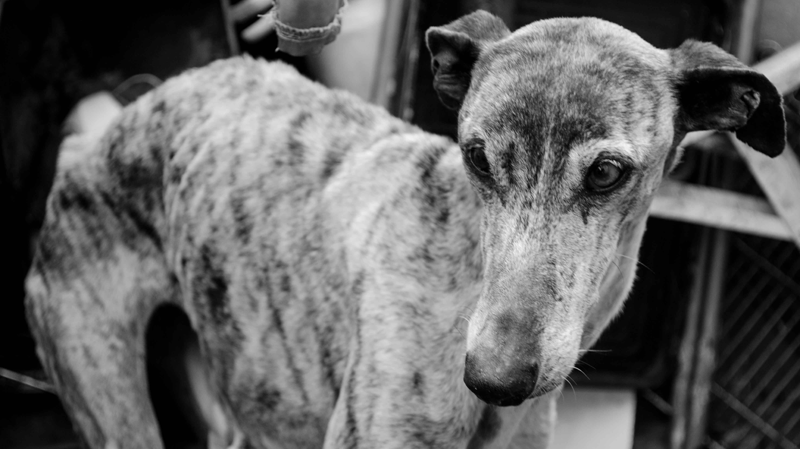 A kind volunteer who immediately fell in love with the Greyhound took her home to foster and care for her. She has named her Gina. “I called her Gina, sometimes Xina as she is from two cultures. She is doing very well and has a constant smile on her face. She spends her days in front of the fire place or on the bed. She definitely knows what a bed is so she was probably a family pet before,” says Annelie, the volunteer fostering Gina. 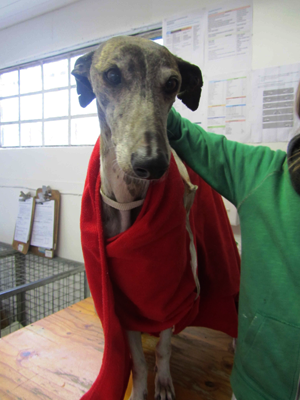 The Mdzananda Animal Clinic would publicly like to thank Teddy Sambu for his heroic work.

“This is a lovely good news story. There are many good people in the community of Khayelitsha who really care about animals. They are our eyes and ears in places that we cannot always reach,” says Marcelle van Zyl, Fundraising & Communications Manager for Mdzananda. “Teddy sets a wonderful example for other community members.”

Today Gina (her newly adopted name) is getting tons of love and enjoying a warm bed with enough food and water from her foster mom Annelie. 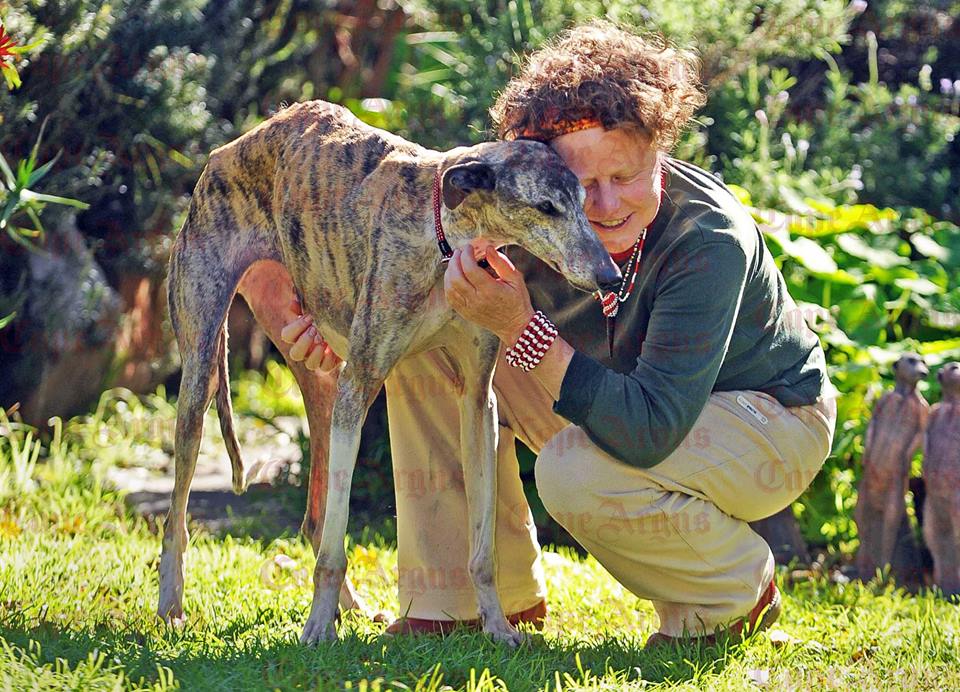 Donate a Shoebox To Your local Shelter
If you want to help the township pets, but do not always know how to do so this easy and fun Shoebo

Reasons why Pet Adoption Applications are rejected
"I entered the kennels and saw him sitting in the corner.  He was staring at me, but was too affraid