Family gatherings, parties, picnics, and barbecues all have one item in common: food, lots of tasty food.

But while party food is appropriate for people, that doesn’t automatically mean that it’s also safe for canines. 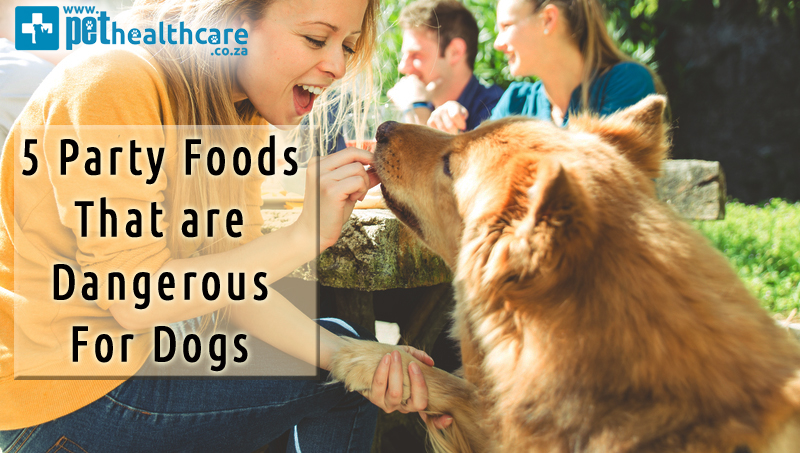 In fact, when you have a party or bring your dog to one, you need to keep a very close eye on what foods are within reach of a dog. Many foods are not only bad for your dog’s digestive system, but they can even be deadly for him to eat.

Here are five of the top foods at parties that are dangerous for dogs. 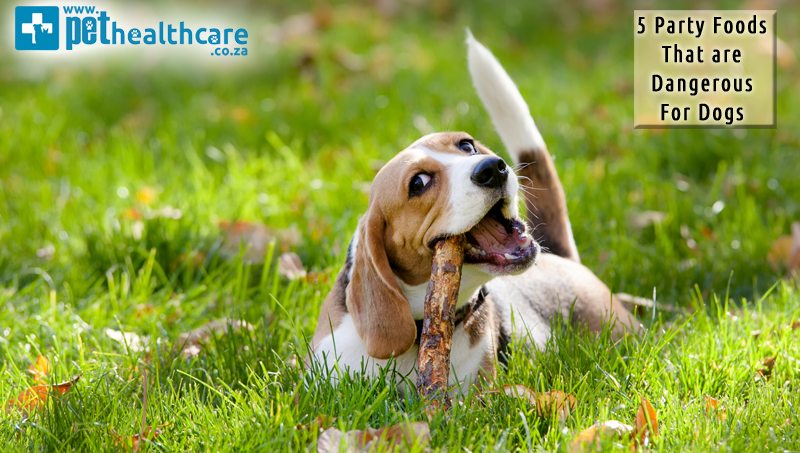 1. Ribs and other meat bones

While it’s tempting for many people to give meat bones to dogs, it’s a very risky act. Dogs can choke on bones while eating them.

Some types of meat bones, like chicken, can also splinter very easily, becoming lodged in a dog’s throat or digestive tract. Not only can that be a hazard, but the bones can also cause punctures to the esophagus, windpipe, stomach lining, and intestines.

Have some of your dog’s nutritious food on hand for him to eat, or bring a dog-friendly chew toy or recreational bone to keep him happy. Keep a separate, covered receptacle nearby and throw all used bones into it. That way your dog can’t get his paws on this dangerous food. 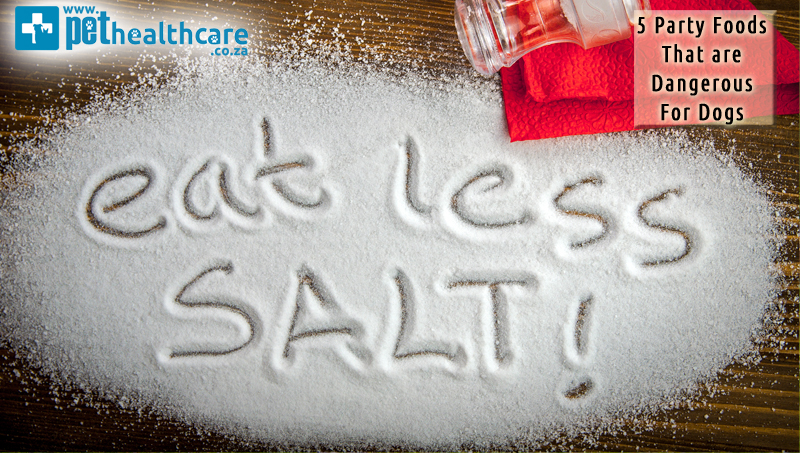 They may seem like simple snacks, but in reality, pretzels and chips are loaded with sodium, which isn’t good for dogs. Too much of either of these snack foods can upset a dog’s stomach, as well as cause excessive thirst and urination.

In severe circumstances, it can result in sodium ion poisoning, which causes vomiting, tremors, diarrhea, seizures, fever, and even death.

Try to keep chips and pretzels in bowls that can be covered, or that are out of your dog’s reach. Also, discourage your guests or other partygoers from the temptation of feeding these snacks to dogs. 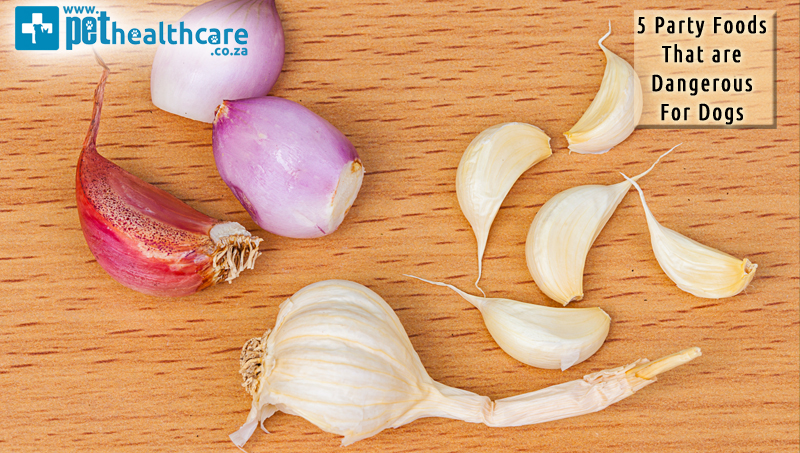 Onions add flavor and can often be found in many party foods from side dishes to large slices on a hamburger patty. This vegetable is prevalent in party foods, so you need to make sure it doesn’t make its way into your dog’s mouth. All members of the onion family --- including shallots, scallions, and garlic --- are toxic to dogs.

A compound found in onions can harm a dog’s red blood cells if enough is ingested, resulting in all sorts of medical problems. The damage onions cause to a dog’s body is usually not evident for three to five days after ingestion. Symptoms of onion toxicity are lethargy, weakness, and dark-colored urine.

Even though a dog would have to consume a significant amount of onion to get to the point of emergency, it’s best to keep this vegetable away from your dog. 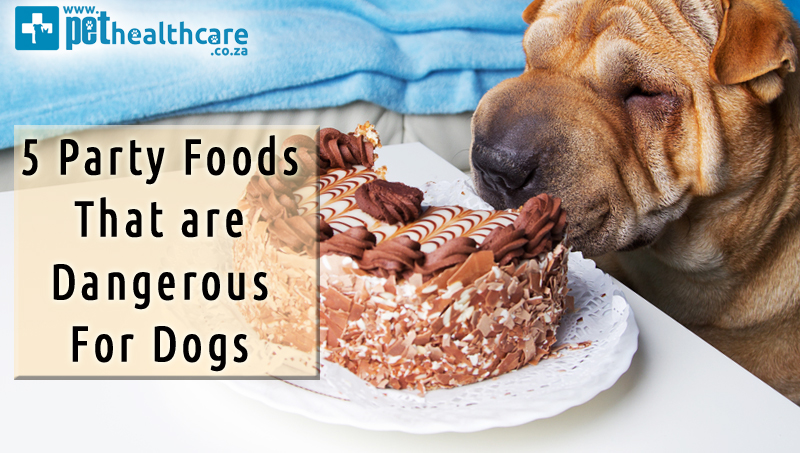 Desserts are everyone’s favorite part of a meal, but they can be deadly for dogs especially if they involve chocolate, a toxin to dogs. Even worse, if the chocolate in the dessert is sugar-free or contains xylitol, a sugar alcohol, it’s doubly toxic. The compounds in both chocolate and xylitol can be fatal to dogs.

The symptoms of chocolate poisoning include seizures, heart arrhythmias, and muscle tremors. Within thirty minutes of ingestion, xylitol will cause a fast, dangerous drop in blood sugar levels accompanied by disorientation and seizures. Some dogs can even develop liver failure, which may lead to death.

Dogs and desserts don’t mix, so keep your pup far away when the cake and pie get passed around after dinner. 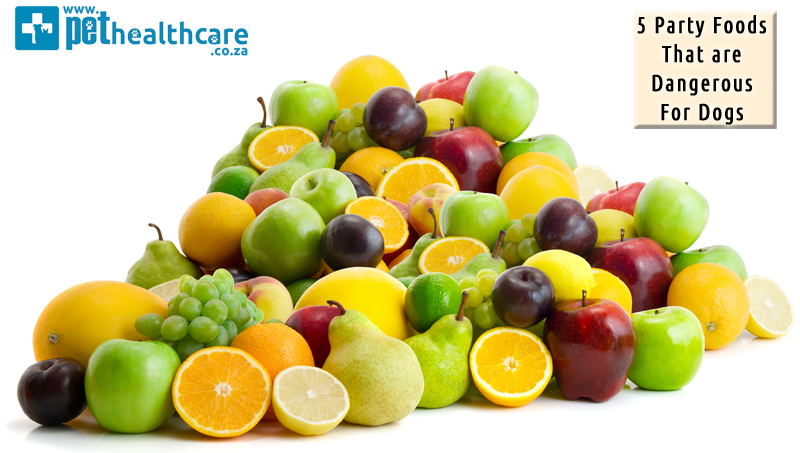 Some fruits are perfectly fine for dogs to eat in moderation, but grapes are not one of them. If you include grapes in fruit salads or desserts, make sure your dog cannot eat them.

Grapes cause kidney failure in dogs; sometimes it only takes one grape, sometimes it takes a few dozen. The problem is you can’t know for sure unless it happens to your dog, something that we’d all agree you want to avoid exploring.

Grape toxicosis results in lethargy, diarrhea, and vomiting about twelve hours after ingestion. The dog will become increasingly dehydrated, may refuse to eat, and will show either an increase in or decrease in urination. Long-term kidney disease or death follows.

Don’t let your dog anywhere near grapes. It can cost him his life.

Parties are associated with good friends and good food, but they don’t always include the right food for your dog. Keep your pup at home during parties with dangerous foods, or if you must bring your dog with you, make sure he doesn’t have access to the party foods that can cause him harm.

9 Reasons You Should Get A Pet For Your Child
By Emily Parker, Catological.com No question about it – pets are great for children!  While anybody

Five signs your cat is ageing
As a pet parent you may not like to think about the fact that your cat is getting older, perhaps be

Itchy dog? Stop the allergy cycle this summer
If you are driven mad by your dog’s constant scratching, licking, itching and ear flapping this summ