Phenylbutazone is declared a prohibited substance. 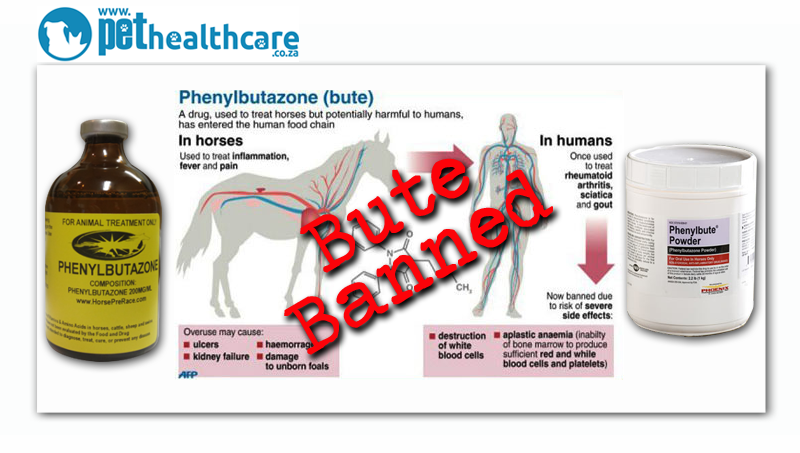 The South African Veterinary Council has confirmed that phenylbutazone has been officially declared a prohibited substance in South Africa with immediate effect.

Phenylbutazone, often referred to as “bute”, is a nonsteroidal anti-inflammatory drug (NSAID).  This is the same class as the commonly used drugs, Ibuprofen and Aspirin.  Phenylbutazone was originally made available for use in humans for the treatment of rheumatoid arthritis and gout in 1949.  However, it is no longer approved for human use in the United States and United Kingdom due to its potential side effects, which include the suppression of white blood cell production and aplastic anemia.

Phenylbutazone is one of the most commonly prescribed medicines in animal practice, used in horses for its anti-inflammatory and analgesic effects.  It is particularly useful for the treatment of orthopaedic pain (lameness) and is still an accepted race day medication in the USA.

The medication was recently reclassified as a schedule 7 drug in South Africa and could still be obtained on prescription, but in accordance with Government Gazette 37622 issued on 8 May 2014 and Section 22, Sub-section 8 and 9 of Act 101 of 1965, the drug now carries prohibited status.

Going forward, professional practitioners who wish to use it for specific purposes, may apply for a permit from the Director General of the Department of Health.

The Council confirmed that veterinary pharmaceutical company Virbac do have a buyback policy valid until the end of May for anyone who would like to return unused stock.  Interested parties may contact Ian Smith in this regard.

Can Sectional Title trustees ban your pet from living with you?
Problems around the ownership of pets are common amongst owners of sectional title properties, but w