With the ongoing trend of living in townhouse complexes and close-community living of whatever kind, it was inevitable that issues involving animals should arise. The National Council of SPCAs (NSPCA) receives an increasing number of enquiries and complaints from “both sides”: - those with animals who wish to be able to keep them and residents or Trustees experiencing problems with animals. 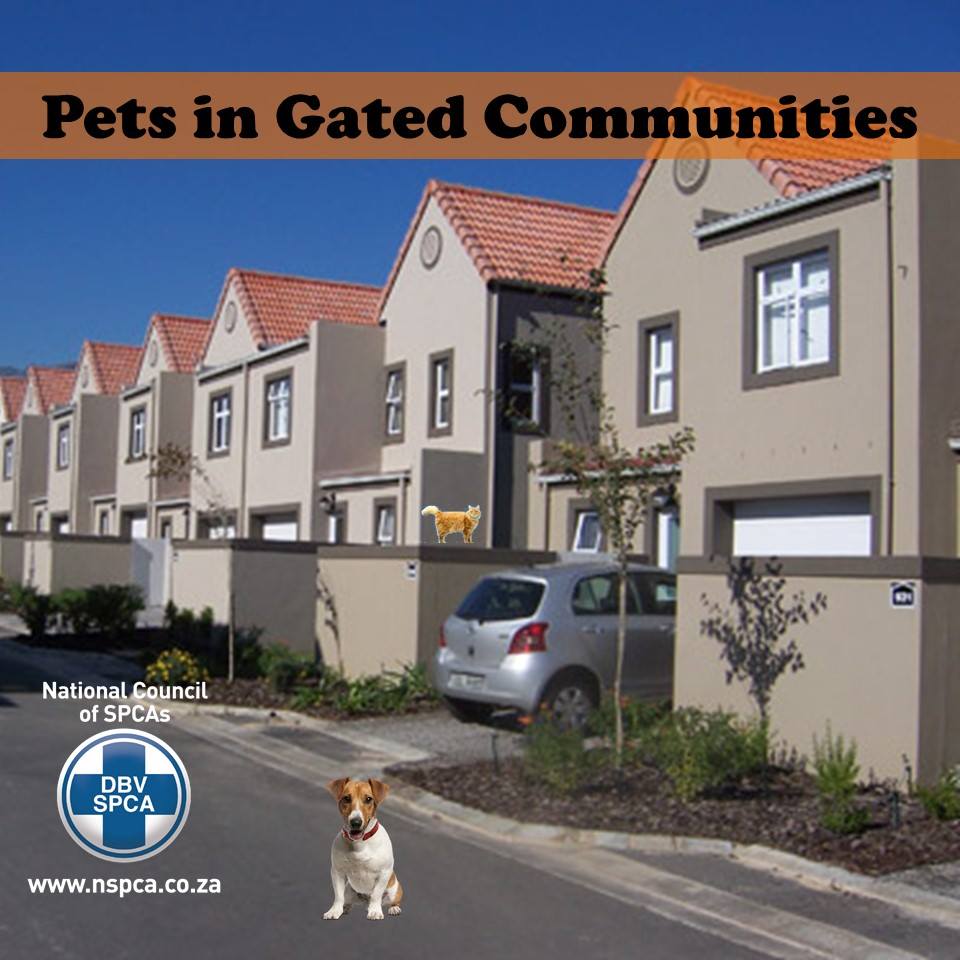 Heart-breaking stories abound of people needing to move but unable to find suitable accommodation that will accept pets or people having to give up animals because housing complexes either will not accept them – or changed the rules once pets had moved in.

On the other hand, SPCAs hear of the frustrations relating to untrained, unsocialised pets or the multitude of issues that can arise when “pets move in.”

To be clear; the SPCA enforces the Animals Protection Act. This relates to the welfare of animals and action can be taken, including “seizure” of the animal, to quote the legal term, in situations when cruelty, abuse or neglect have taken place.

Nuisance Behaviour
Matters relating to “nuisance behaviour” fall under local by-laws. This includes causing a disturbance by howling, barking or whining as well as dogs (and increasingly, cats) wandering off or being allowed to stray beyond their own properties. Generally speaking, by-laws are enforced by Municipalities or duly appointed sub-contractors.

A frequently asked question is how much space each dog needs.
A qualified animal behaviourist is best placed to answer this but the NSPCA view is that there are other very important factors to consider. These include the level of interest in the animal, meeting its behavioural needs, exercise, interaction with people generally, socialisation and general care and attention including veterinary as well as grooming.

It doesn’t necessarily follow that the smaller the breed, the more suitable it is to a smaller property. Ridiculous rules have been enforced including that a dog may not be taller than a specified number of centimetres! Jack Russell terriers may fit that bill but it would be hard to find a more energetic breed of dog.

Decisions of this kind need to be made at the outset and made clear to all. It is unfair to residents and the pets when about-turns are made by Body Corporates without due cause and people either have to relocate or give up their pets.

Prevention is always the key.
It may take compromise and it certainly takes planning but there are ways to accommodate responsible owners and pets. Take time to check if the accommodation accepts pets and, if so, under what circumstances. From a body corporate or landlord’s point of view, various checks can be carried out in advance and the results are indicative of the kind of animal owner who would be moving in.

Why do Pets get rejected from complexes?
It is important to understand why pets can be rejected in complexes etc. By this we not only refer to pets not being allowed but to decisions taken by body corporates at certain points after issues (and usually conflicts) have arisen. This usually results from bad experiences with irresponsible pet owners who did not sterilise their pets or confine them safely or failed to pick up faeces. Likewise, it only takes one resident to bring in a pet whose persistent howling or barking disturbed other residents, that a “last-resort” decision was taken which affected everyone.

Do not sneak your pet into a complex.
Sadly it happens that pets are sneaked in, with owners thinking their presence may not be discovered or by the time it has, it will be too late to do anything about it. This is irresponsible, simply untrue and may carry consequences for more than one owner and his/her pets.

It is a two-way relationship and there are responsibilities on both sides. Residents need to promote themselves as responsible pet owners and also to demonstrate commitment which goes beyond pet care and includes being a responsible neighbour.

RESPONSIBLE OWNERS: -
• Clean up after their pets and dispose of the waste in a sanitary manner
• Keep their dogs on leashes at all times when outside the home grounds
• Ensure that their animals are identified – the NSPCA recommends microchipping
• Obey local by-laws pertaining to animals
• Spay or neuter their pets not only to improve the health and behaviour of the pets but also to prevent their animals adding to the tragic problem of pet over-population
• Maintain an active tick, flea and deworming programme so these pests won’t spread
• Ensure their pets are vaccinated
• Provide sufficient attention and adequate activities or items (toys, chews etc) to provide for the animal’s behavioural needs.

Get Written Permission Before You Move in
It may be advantageous to both sides if documentation is requested and confirmed: - a letter of reference from a previous landlord or body corporate, written proof the adult dog has completed a training course or obedience class – or that a puppy is enrolled in a socialisation class.

A letter from a veterinarian is a good idea, stating that the pet is a registered patient and that the owner is diligent about the pet’s medical care. It would be extremely helpful if documentation were supplied that the pet has been spayed or neutered and is fully vaccinated – including against rabies. Sterilised pets are healthier, calmer and far less likely to be a nuisance to their neighbours. Plus, health factors cannot be overlooked for all concerned who may come into contact with the animal.

Living with an animal is a privilege not a right.
Responsibility is the key. It works both ways.   Problems with the housing situation are one of the most frequently given reasons why pets are handed in at SPCAs.

What is considered an acceptable Pet?
A key factor that is often overlooked is to specify what are acceptable pets. The NSPCA opposes exotic or wild animals as pets on welfare grounds yet there is also an adverse impact on neighbours in terms of potential danger of zoonosis: - when a disease or condition is or can be transferred from an animal to a human. All reptiles carry salmonella.

Cute video A Little Boy and his dog
Whats more fun than sharing a puddle of water with your best friend? This must be the cutest short v

Sticky Pawz helps dogs who struggle to walk
This weekend [8 - 11 May 2015] we are giving away 3 sets of Sticky Pawz to 3 Lucky readers, and we h