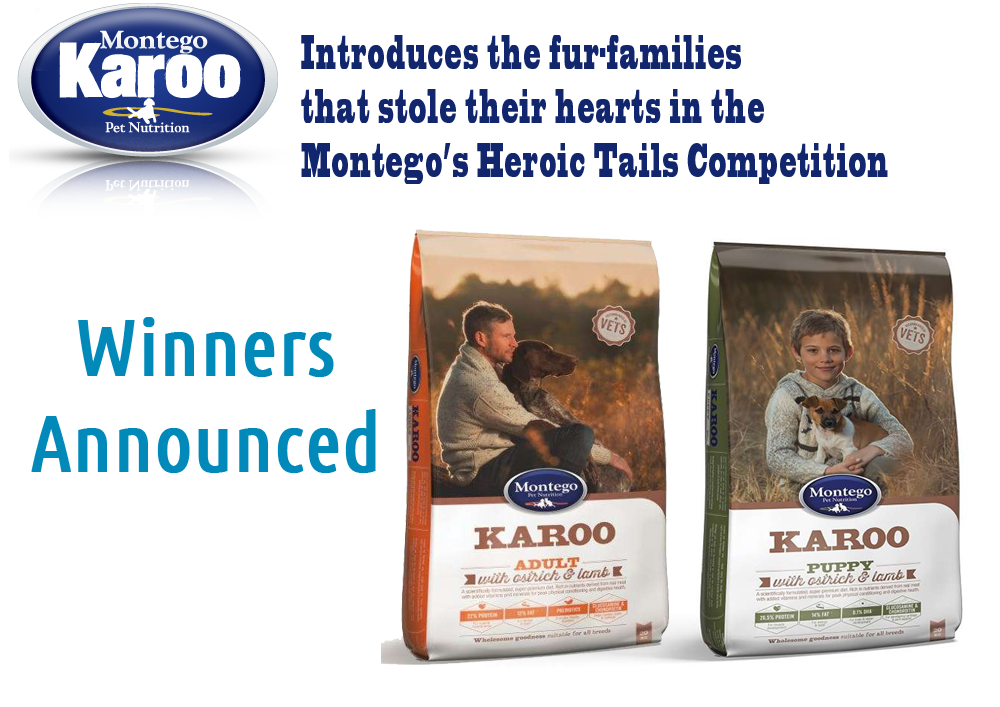 The biennial Montego Heroic Tails competition is aimed to honour and celebrate a man’s best friend with the loyalty and love they show their humans every day.  Montego Pet Nutrition is proud to announce that “The Hero” (overall winner chosen from one of the 4 2016 categories) of the competition is Kimbal (Princess Kimmi Bean), the boxer blend who never gave up fighting!

The competition opened on 1 August 2016, with more than R30 000 worth of prizes including Montego’s delicious Karoo Dog Food up for grabs.

This year, there were 4 categories including;

“We are extremely proud of the winners of the 2016 Heroic Tails competition and would like to thank everyone for entering the competition – in our eyes all the entrants are winners” says Wilfred Cawood, Marketing Manager, Montego Pet Nutrition.

This entry was on behalf of Molweni Animal Outreach volunteer, Elaine Cairns, who at the age of 81 makes a daily trip to the township of Molweni, together with her dedicated assistant Doctor Mthombeni. The two saviours set out each day to find animals in Molweni (KZN) in need of veterinary care.

Elaine says that she is so thankful and that it truly is a great honour and a tremendous reward that her hard work is being publicly acknowledged. She will be using the prize money by donating it to make a dent in the massive clinic costs incurred by Kloof and Highway SPCA, who have never refused to treat any of the hundreds of sick, injured and unsterilized animals she has bestowed upon them.

Kimbal was found burned, blinded and caught in a trap. Her eyes were clamped shut and full of puss. After eight days of rest and extensive daily treatment, Kimbal visited the Johannesburg Animal Eye Hospital where it was predicted that because of good pupil response, her sight could be restored. The tremendous transformation of healing and recovery made Kimmi’s story the perfect one for Montego Karoo’s Heroic Tails’ “The Survivor” category and is also the overall winner of 2016.

Rescued on 11 September 2015 from the streets of Krugersdorp West, it was clear from the wounds on his body that Bismarck was used as a bait dog. However, this dog wasn’t ready to give up on life. During his first big surgery, his heart stopped, but he kept fighting and he had thousands of people fighting with him.

Bismarck’s owner, Charmaine Booysens, hopes that winning will get their rescue centre, The 9th Day Rescue, Rehabilitation & Rehoming Centre, more exposure.  “Personally for myself and Bismarck we do not want to benefit from this – we want abused, abandoned and neglected animals to benefit,” says Charmaine.

In December 2011, the Kotze Family went to FORA (Friends of Rescued Animals) looking to adopt a dog, but came home with five instead! Red was a small brown puppy, only 6 weeks old, hand-picked by Walt (8) to be his dog. Red grew into the most amazing and enthusiastic companion that a boy with Autism Spectrum Disorder (ASD) could ever ask for.

Red was entered for Montego Karoo’s Heroic Tails competition for two reasons - education and awareness. His family knew that it was important to get a message out to the public about the wonderful benefits of a K9 companion for young children, special needs or not.

Red’s owners are ecstatic about winning and feel very blessed. “Being a winner has benefited us by being able to give back,” says Lizelle Kotze (Red’s owner).  “My son and I entered with the intention to donate our winnings to our local charity, the 9th Day, who are in desperate need for funds to build new kennel facilities for their 190 dogs,” explains Lizelle.

Andrew Dijkstra noticed that the only way to help manage episodes of depression, that he frequently suffers from, is to get out and exercise. “I discovered many years ago that whatever is produced by the body during exercise, can have a positive effect on a person’s mind,” he explains. Then Kibo, his Australian Cattle Dog, became his running companion with energy and intense loyalty that made the trail runs change from mere therapy to incredible joy.

Andy entered Kibo in the competition because he wanted to share his story of the profound bond that he has with his dog. “I am pleased that the story has been recognized and I hope to encourage others not to underestimate the therapeutic potential that pets can have. Kibo’s future is bright because there is a mutual respect between us and he is well cared for and well fed with Montego,” he says.

After having been found abandoned on a farm, three baby genets were brought to DAKTARI Bush School & Wildlife Orphanage, a nonprofit in the Limpopo province.

To keep them extra warm, they were placed next to three of the co-founders’ dogs. One of the dogs, Candy, became very attached to the genets and started to bond with them. The day after the genets arrived, the founders, Ian and Michele Merrifield, realised that the genets began suckling at Candy’s teats. They looked closer and saw that Candy had started producing milk for the genets! She became their surrogate mother from that point on. She fed them and looked after them daily.

Now, two of the genets have been released into the wild and one remains at DAKTARI’s Wildlife Orphanage, as she could not handle the stress of release. Candy and the remaining genet, Chouchou, continue to spend time together like old friends.

“We are very proud of her and being part of a non-profit organisation we also wanted to share her story to explain how our animals, domestic or wild, have an impact on everybody’s life, including other animals. I always explain to children that when I was a kid and would cry of sadness, my dog would always come to me to lick off my tears,” says Michelle.

On their way to do their daily afternoon job to round up the sheep, Bobby and Stark went with their owner, Andrea, who was on horseback. Andrea had a nasty fall off her horse, which left her unconscious for a while. Bobby, the fastest one of the two, ran home and straight into the stables where Riaan was feeding the horses. The dogs never go into the stables, so Riaan immediately knew something was wrong.

Riaan and Bobby took the bakkie and started the search for Andrea, along with Riaan’s parents who also helped. “Stark stayed with her the whole time and tried to wake her up by licking her gently in her face, which eventually worked. Thanks to Stark they were able to find Andrea,” says Riaan.

These two will be getting spoilt with more Montego treats that their owners will be buying for them with their cash prize and of course they will be getting a medal and certificate that they can brag with too!

“We are extremely proud of all the winners and trust they will continue to enjoy Montego pet food.

This competition not only aims to recognize and reward our furry friends, but also their owners and the various charity organizations who work tirelessly to protect and provide loving homes” concludes Cawood.

Pet Ownership in South Africa is becoming more challenging
Whilst it is a very sensitive subject, it should still be one that needs to get more attention indee

What Makes Leather Dog Collars Better Than Others
Are you a proud owner of a loving dog? Well, you are blessed indeed. Dog ownership comes with imme

Eukanuba announced changes for 2018
Media Release: March 2018 Eukanuba has some exciting changes happening this year. We are eager to sh

How to Clean Your Dog's Ears using Buchu
If you’ve seen your dog’s ears prick up when someone unwraps a food item in the room next door, you’

5 Perfect Dog Breeds for Kids
A dog will be a fantastic addition to your household. There are so many good reasons why it’s benefi

The Kittens of Khayelitsha
A young lady Steffi Bergmann from Germany volunteers in a South African rural township to help the...

Good and bad foods for pets
Those eyes that stare at you while you eat are just too cute to want to ignore, but it is at this...