Its wonderful to know that there are Local Governments in South Africa that make an effort to lead the way.  The City of Cape Town have recognised the historically gigantic problem of Animal Welfare and have taken on the initiative to become more involved and have committed to provide much needed assistance.

"The greatness of a nation and its moral progress can be judged by the way its animals are treated."

Our nation is indeed heading in the right direction.  Herewith a media release with regards to a draft bill to take their commitment to the next level.

They are asking for input and guidance from the general public with regards to providing a budget to the Animal Welfare Industry for matters such as pet sterilisation, animal control, humane euthinasia guidelines, working animals, companion animals, animal trading etc. with the aim to review the status every 3 years.  This is your opportunity to get involved should you wish to do so.

We will follow the progress and keep you informed.

The City’s draft Animal Welfare Policy opens for public comment next week. Residents are encouraged to provide input into the City’s efforts to promote animal care. Read more below:

This follows a workshop with interested parties facilitated by the City’s Health Portfolio Committee in May 2011. The presentations and contributions at this workshop served as the basic framework for the draft Animal Welfare Policy. In January 2012, the Western Cape Government hosted an Animal Welfare Summit, followed by a further workshop in March 2012 – both of which provided further direction for the policy.

The finalised draft will undergo a public participation process from 9 September to 11 October 2013 during which stakeholders and interested parties are encouraged to provide their comments. The draft policy will be made available for viewing at the City’s libraries and Subcouncil offices and electronic copies will be available on the City’s website, at www.capetown.gov.za/haveyoursay. Comments can be submitted via email to Animalwelfare@capetown.gov.za.

Two public sessions where oral representations will be heard are scheduled for 14:00 and 17:30 on 26 September 2013 at the Council Chambers, 44 Wale Street, Cape Town. Residents should please register to attend either of these sessions by sending a request via email to animalwelfare@capetown.gov.za.

This policy is supported by the legislation that the City is mandated to implement and entitled to enforce, i.e. the City’s Animal By-law which regulates the management of animals, including dogs, cats and working equines. This is important in terms of ensuring public health and safety. However, the by-law does not clearly articulate the City’s approach to the care and welfare of animals. In the absence of a policy, there is a lack of clarity on the roles and responsibilities between and within government for promoting animal care. The City therefore identified the need for a policy, as part of its commitment to creating a Caring City.

Animal rights need to be balanced with the potential effect that animals may have on humans. The City has the difficult task of considering any health, nuisance, economic, tourism, and safety risks and ensuring that it has legislation and policies in place to protect residents and animals.

We attended the meeting and these were the comments from some of the speakers and audience: 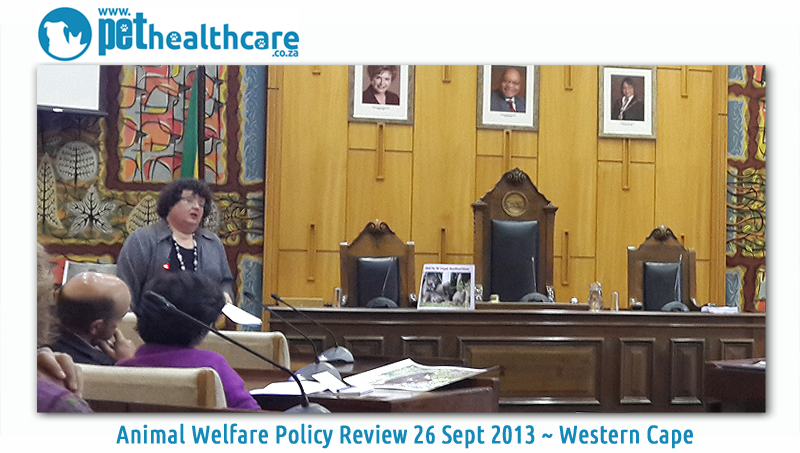 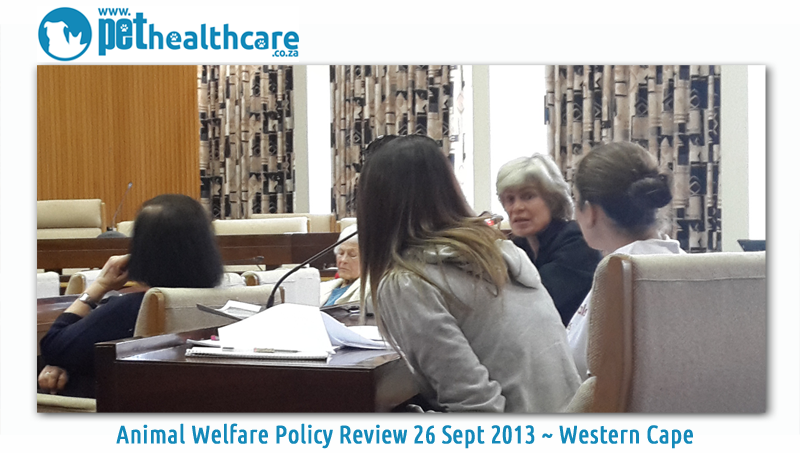 www.PetHealthCare.co.za did not attend the second session at 17h30, so the discussions which took place there are not part of this feedback.  For such an important matter, it was rather disappointing to see such a small turnout by those who will mostly benefit from this initiative.  Its understandable that the welfares and shelters have their hands full, but this brings me back to the basics of business and that is to understand the difference between Urgent and Important.  Once this is understood the running of any organisation can be so much more efficient.  Come on Welfares and Shelters, lets have you present and more active at these "important" meetings.  We love the work you do and we value it, which is why we are here trying to make your voice heard.

I am actually very pleased that there are organisations such as PetHealthCare that takes such an active interest in the well being and protection of animals.

Anyway, I have attached a document with emails I have send to people in and around East London, trying to get some political involvement into starting a process of Animal Rights that once entrenched into legislation will serve as a guideline for compliance to all other bits and pieces of Animal legislation we have in South Africa. I also believe that if we in SA can take a leading role in this, we may be able to influence the rest of the world to follow suit or implement similar initiatives. I have no success so far and can only presume that the type of legislation I have in mind is perhaps might be to difficult to get implemented and might create a problem for political parties to accept and propagate on political platforms. Never the less, if there is enough public support for a certain idea or concept then the politici have to sit up and take notice.

Animal Rights might be the wrong vehicle to get the results I am after. In short, what I would like to see come into being is legislation that enforce spaying and neutering of all (?) animals, particularly household pets such as cats and dogs and that no animal trader or pet shop must be allowed to legally sell an animal that is not spayed or neutered to any person or organisation that is not registered as a breeder. I believe there is a place for responsible breeders in our country and the rest of the world. The problem I am having is the ability of any person to go into a pet shop and buy an unspayed or unneutered animal over the counter and start their own little puppy mill in their backyards. One can also say, what is to prevent a person or organisation from registering as a breeder and although there should be little interference, there needs to be a code of conduct a breeder need to agree to to get breeder status and retain it. That code can ensure that operations such as the backyard puppy mill will no longer be a viable option for opportunistic breeders. Legally enforced spaying and neutering also have the added benefit that we as humans will then be able to guarantee the right of life to animals (except of course animals classified as pests or the dinner table, since the world is realistically not going to become vegetarians over night), since their numbers will decline to such an extend that the drain on the economy housing unwanted animals in a suitable environment will gradually decline as these animals die of natural causes.

Vetiquette 101: What your vet would like you to know
If you think a visit to a vet is like visiting the local doggie park, then it’s good you are reading

Support the Animal Protection Amendment Bill, 2017
At Pet Health Care we are the mostly concerned about our pets and their health, but it is always

South African Public Holidays 2018
Planning a holiday ahead of time can make or break a good #PetFriendly getaway, and for this reason

10 Facts about the Ebola Virus
Can the Ebola virus infect our pet dogs or cats?  Before we get to answer this question, let's get t