15 November 2016: Visitors to Cape Town’s Victoria and Alfred Waterfront often spot marine animals such as Cape fur seals frolicking in its harbour. However, this weekend past, they were treated to a extremely rare sighting of a Dwarf Sperm whale - the smallest whale species in the world. 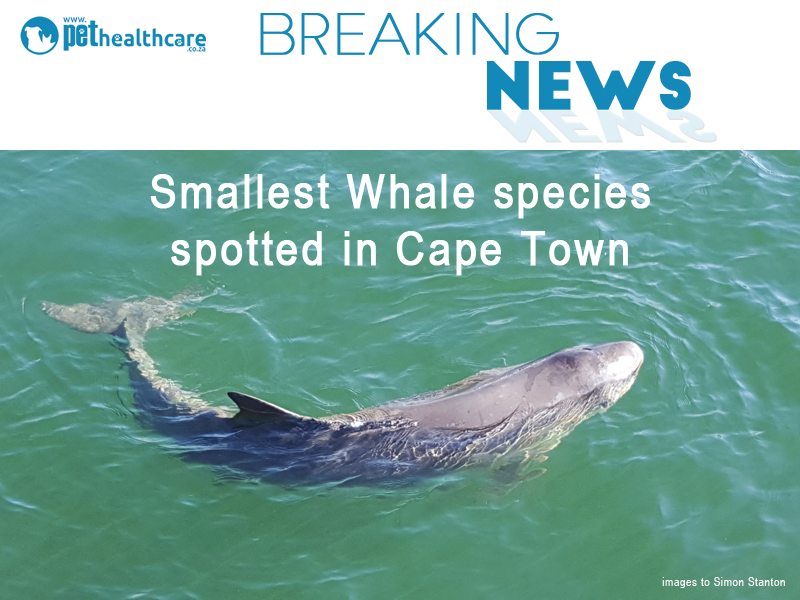 Dwarf sperm whales are not often sighted at sea - as they prefer the deeper mid-levels of the ocean, mainly feeding on squid and crab. The majority of information about these whales comes from the study of stranded carcasses.

"The dwarf sperm whale is one of three extant species in the sperm whale family.
They are not often sighted at sea, and most extant information comes from the study of stranded carcasses." - Wikipedia

Simon Elwen, a Research Fellow at the Mammal Research Institute, located at the University of Pretoria, says it’s quite rare to see a live free swimming animal so close to shore.

This Dwarf Sperm whale was spotted swimming in a basin in front of the Quay Four restaurant. They are quite small - smaller than a dolphin - growing up to about 2,7 metres in length and weighing in at approximately 250 kilograms.

Sion Stanton, a wildlife photographer based in Cape Town, visited the V&A Waterfront on Friday 11 November 2016 to see the rare whale.

“I spotted the Dwarf Sperm whale at around 08:10 in front of the Quay Four restaurant. I watched it for about an hour, as it swam in circles, moving around the basin.” 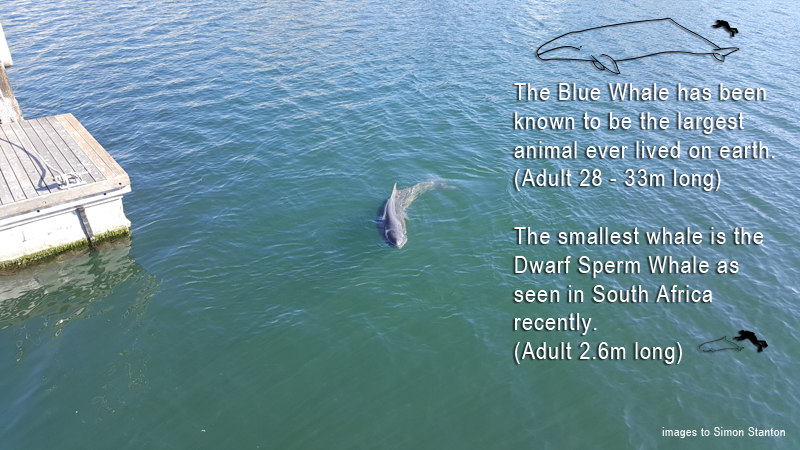 The Dwarf Sperm whale swimming in a basin opposite the Quay Four restaurant in the V&A Waterfront. Image by Sion Stanton.

Stanton added that the whale has been spotted in the V&A Waterfront for the past two weeks.

“I spoke to a member of a dive company based at the waterfront, who told me that they occasionally spotted the whale swimming in another basin for almost two weeks, before it moved to the basin in front of Quay Four.”

Elethu Mkhangelwa, manager at the Quay Four restaurant also spotted the Dwarf Sperm whale in the basin opposite their eatery, and says it generated quite a lot of interest over the weekend.

“We spotted the whale in the basin in front of our restaurant on Friday and Saturday, and it was quite popular with our guests. I’ve been told that the whale is extremely rare, so it was quite an experience to see it so close to us.”

“South Africa is blessed with the Big Five, the Small Five and to have a rare species such as the Dwarf Sperm whale on our shores at the iconic V&A Waterfront - one of Cape Town’s top tourist attractions - just illustrates how incredible our country’s biodiversity is.”

Why Crating your dog is not cruel
For thousands of years dogs have sought out small, enclosed spaces for shelter and security. These d

5 Pet Food Business Ideas
Are you working in a job that you really wish you were somewhere else?   Do you love animals and coo

Hidden Household Hazards for Pets
Our homes may feel safe and cosy, but they’re often filled with potential health hazards. Each year

THE ANIMAL CLINIC OF KHAYELITSHA
“There is a myth that people in townships do not care for their pets. We have a different opinion.