At Pet Health Care we are the mostly concerned about our pets and their health, but it is always critical to remain aware of the bigger picture, and that is the general mental and physical health of all animals.

It is for this reason that we wanted to share with you the value of this Animal Protection Amendment Bill and hope that your participation will be a part of a successful outcome of this vitally important product. 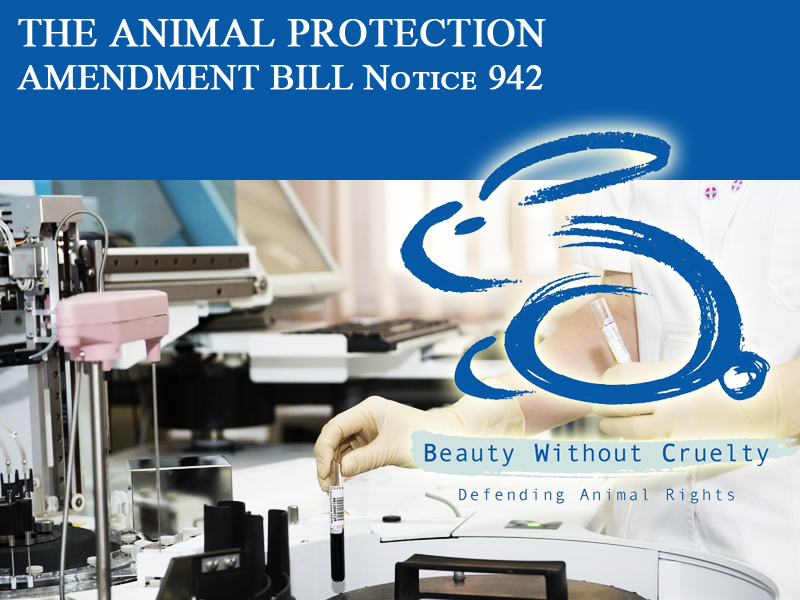 At the beginning of 2017, Cheryllyn Dudley submitted a Private Member's Amendment Bill after Beauty Without Cruelty proposed that amongst other things, cosmetic testing be banned on ingredients and products in South Africa. There are already non-animal methods available which are effective, accurate, cost effective and give almost immediate and consistent results.

In short, what exactly is the Animal Protection Amendment Bill, 2017?

This is a legislation to protect animals while humans use them for their own needs, specifically for Cosmetics. All human and animal grooming products fall under this category.

This amendment is about introducing the banning of cosmetic animal testing. Both ingredients and final products. Should this be successful, we will be the first country in Africa to ban the cruelty related to cosmetic testing on animals . European Union has already done so, San Paulo has banned, Brazil is working on it, India is the first BRICS country to ban cosmetic products on both ingredient and final product and both imported items which have been animal tested.

What exactly will the changes be for this ‘amendment’?

We see on social media many comments and questions from those who might be uninformed as to exactly what you are trying to achieve.  What exactly is the Animal Protection Amendment Bill, 2017 not?

We are against any animal abuse and there are other issues which need urgent scrutiny: This Amendment Bill is not about vivisection or any other aspect of animal welfare, e.g., tail docking of pigs and sheep.

It is important to understand that if we included vivisection (medical research, disease control, vaccines, military weapons testing – there is way too much money behind these forms of research), we would lose the battle for both. It is therefore our aim to approach this in stages, rather than trying to amend it all at once.

What are the biggest changes that needs to take place to ensure a better life for all living on our planet (…eh, South Africa)?

Go vegan. And if you absolutely cannot go vegan, then please significantly reduce your intake of animal products. It is better for the planet, your personal health and the animals who suffer.

What is needed from the public to help make this Animal Protection Amendment Bill, 2017 a success?

People need to understand what we are trying to achieve, and all we would like for you to do is to please click on this link to send a letter of support to those who are fighting on our behalf to stop the abuse of using animals for Cosmetic Testing in South Africa.  Thank you!

The proposed legislative amendments are a significant step in the right direction towards better statutory protection for our fellow earthlings. As far as it goes, the Animals Protection Amendment Bill should be uncontroversial.  It deserves the unreserved support of all decent, humane and compassionate South Africans.

This legislature will not cost the government anything, nor will any jobs be at stake. This will be a first for Africa!

How do I know my dog has heat stroke?
The first signs of your dog heating up is a restless form of panting.  You might even notice their t

MuttMix Dog DNA
Unlock the mysteries of your dog’s genes to reveal its breed by undertaking a Doggie DNA test. The