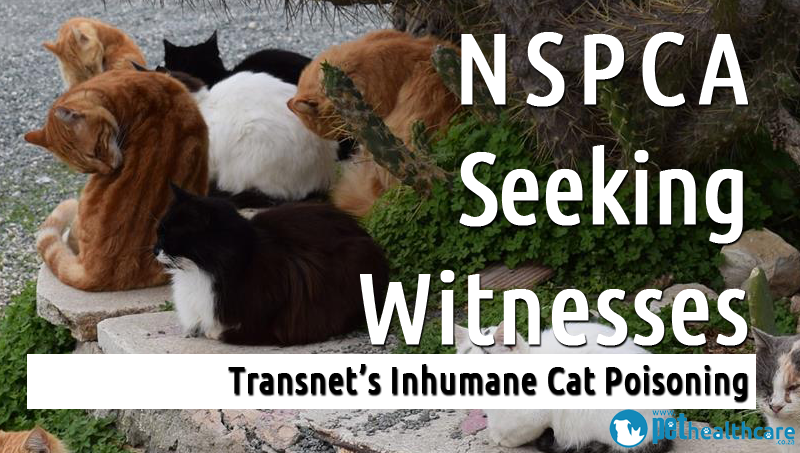 People with information to please urgently contact: DIALE RATSELA on 071 550 7733

Transnet’s proposed method of eradicating cats in and around various premises owned by the company has met with shock, anger and absolute condemnation by the National Council of SPCAs.

The NSPCA asks what kind of people would advocate cruelty to living creatures on this scale? The brutal, pitiless and ruthless treatment of cats who will suffer or have already suffered terribly, prior to death is inconceivable.

Yet, the “knock-on” effect extends to the secondary poisoning and the suffering of other creatures: - including owls and other scavengers.

Do they care? We think not.

Mirriam Tenyane, the compliance officer for Transnet, has allegedly commissioned a poisoning protocol to operate nationally at Transnet sites where there are feral cats.

Poisoning animals is a contravention of the Animals Protection Act No 71 of 1962.

Correspondence was submitted to the Executive Director of Transnet, requesting an urgent meeting to discuss the matter. To date, the NSPCA has received no response or feedback despite additional telephone calls having been made and emails sent.

Whilst it is acknowledged that problems may arise with regard to homeless or “feral” populations of animals, HUMANE methods of control, handling and resolution must be employed.

The NSPCA assures all concerned individuals that we shall pursue this matter relentlessly and steadfastly.

An urgent and heartfelt appeal is made to welfare organisations and caring individuals, including employees of Transnet, to come forward with any evidence of cruelty, poisoning or the mistreatment of any animal by Transnet. Signed affidavits are required.

NGO at loggerheads with Transnet

Royal Canin’s expert advice for adopting a new puppy or kitten
There is nothing quite like bringing home a furry addition to your family. The arrival of your new

The ICEBERG EFFECT of BITE WOUNDS
Bite wounds are one of the most common cases emergency Veterinarians encounter. This article serves

Pet-friendly Easter treats
Before you splurge on Easter treats for the family pets, be warned - chocolate can kill.  “Chocolate

Permission to keep pets in Sectional Title schemes
Three of the most contentious issues that arise in sectional title schemes are parking, people and p